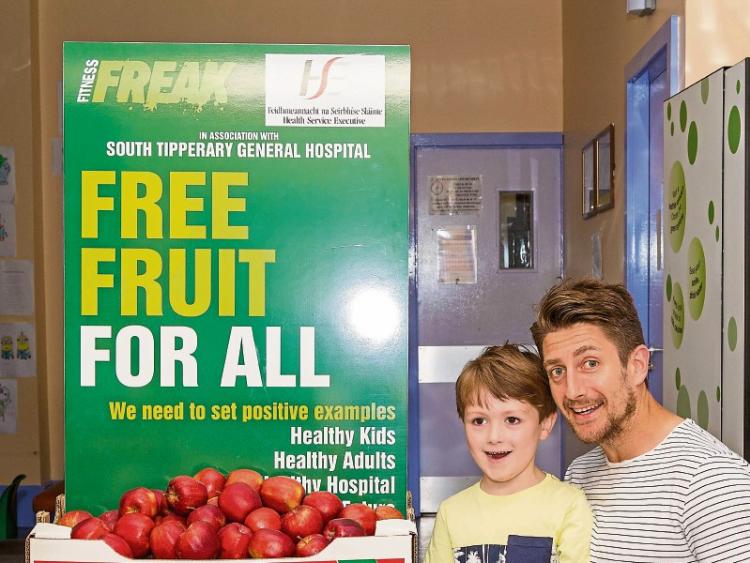 Richard Kennedy with his son Louis.

A visit to a vending machine while his son was in hospital was the catalyst for health and fitness trainer, Richard Kennedy, to launch his Free Fruit for All campaign in South Tipperary General Hospital.

The Rathgormack man is on a mission to engage with parents and retailers on the need to educate children and adults about clean food and nutrition from an early age.

Richard, with local support and corporate sponsorship, is distributing free fruit to shops, schools and even hospitals in a drive to give children a healthy alternative to sugar -laden snacks and drinks.

The idea to encourage all to eat healthy and forego the ubiquitous sweet treats that are readily and freely available in shops came to Richard eighteen months previously.

“Shops are the biggest culprits.  The amount of sweets and unhealthy food located at pay points is unbelievable.  If you walk into any garage or store, and stand at the counter you are surrounded by sweets, chocolate and crisps.  No wonder the annual cost of obesity in Ireland is estimated to be €1.3 billion.”

Richard recounts - “I was frustrated with going into shops with my two little boys and being surrounded by rubbish in particular at cash points.  It became an almost constant battle to get out without buying them something unhealthy.  So, I kicked it off with a “Free Fruit for Kids Friday” in ten Clonmel stores.  The original store I approached was James Whelan Butchers who was very enthusiastic about the project and following that the project was rolled out in AIB bank, Lifestyle Sports and SuperValu.

According to Richard, the seed for Free Fruit for All was sown after his four year old son spent time in hospital.  “We were on the ward with Ollie for some time and whenever we went to the vending machine to get a snack, the only options available to us were sugary, processed bars, drinks and crisps stuffed with artificial additives.  I found it hard to correlate a hospital with the provision of such nutritionally deficient food.”

Richard continued - “That’s when the idea came to me.  What if not just shops but hospitals too that would provide free fruit to children and adults?   Not only would it curb their appetite, it would give them a better appreciation of good clean food and help them develop healthy choices.”

Richard embarked on his mission to have baskets of free fruit in hospitals and available to not just the patients, but to staff and visitors also.  South Tipperary General Hospital was the first to get on board.  Each week a local business sponsors the initiative, the fruit is supplied by The Apple Farm in Cahir and every week is delivered to the hospital by transition year students from Clonmel’s Gael Scoil as part of their TY programme.

The initiative is running since June last year, and so far, there have been 27 sponsors supporting the Healthy eating programme.

Some frightening statistics published by SafeFood.eu that drove Richard to dedicate so much time, energy and passion to the initiative included:

•1 in 4 Irish children are overweight or obese

•Overweight children are more likely to be overweight/obese adults

•Overweight children are more likely to be bullied and socially alienated

Richard’s initiative was recently referred to by celebrity chef and good food advocate, Jamie Oliver on his Food Revolution blog.

“It was fantastic to get an endorsement from Jamie Oliver.  He is a long-time champion of teaching kids about the benefits of healthy eating.

His School Dinners Campaign was the first of many to get junk out of UK schools.  He even met with former UK Prime Minister, David Cameron, back in 2015 to propose a tax on sugary drinks, something which I am pleased to say, will eventually be introduced in Ireland.”