Protest march is called off for Roscrea Garda Station 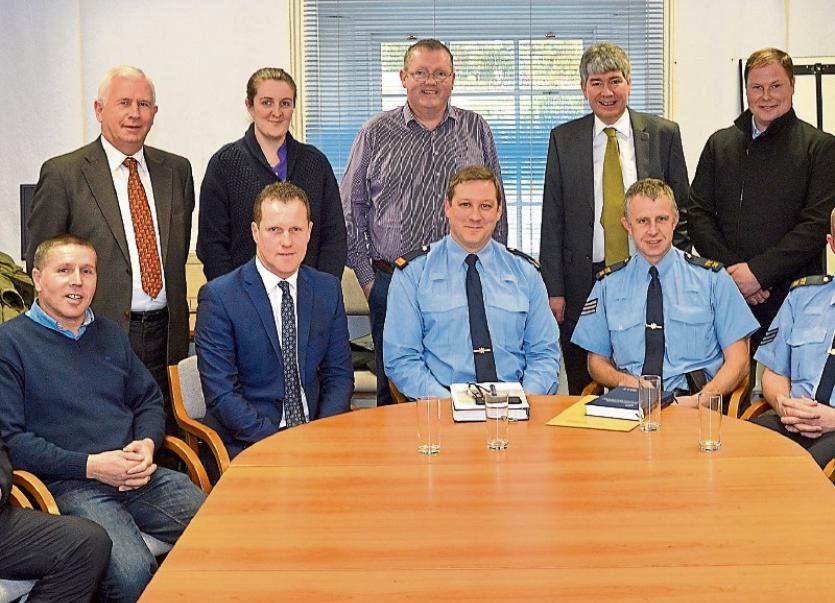 A planned march to protest at the status of Roscrea Garda Station has been postponed indefinitely, after local Gardaí moved to reassure townspeople that the Station will now be fully manned, 24-hours per day.

At a security briefing in the Station on Monday evening, newly appointed Inspector Seamus Maher introduced two new Sergeants who have been appointed full time to Roscrea, Sergeants Ger Harrington, and Bill O'Dwyer.

Combined with extra manpower across the Division, and a change in rostering, this means the situation where one Garda is left alone in the Station can no longer arise, and Roscrea Gardaí will be quickly able to respond to all local crises.

Inspector Maher came to Roscrea Sub District in October 2016, and has previous experience in the area of crime and drugs investigations having served in Clonmel for the past seven years as Detective Sergeant, and prior to that he was Drugs Sergeant for the County of Tipperary. Insp. Maher has 21 years service in An Garda Siochána with 12 years as Sergeant in Tipperary Division.

Sergeant Ger Harrington joined the force in 1999. On leaving Templemore, he spent three a half years in Rathfarnham, Dublin, working mainly in traffic enforcement and crime. He transferred to Thurles in 2004 and spent 11 years in the Divisional Traffic Corps before being promoted to Roscrea. Sgt. Harrington worked in road traffic managment and is skilled in Roads Policing.

Sgt. Bill O'Dwyer is a native of Thurles and joined An Garda Siochána in 1993 and went to Pearse St. Garda Station on appointment. Sgt. O'Dwyer carried out a number of functions outside frontline policing including Community Policing, Warrants Management, and event organisation. He has 24 years' service with the majority of this service spent in Dublin's inner city. Sgt. O'Dwyer transferred to Roscrea from Mountjoy Garda Station.

Cllr Michael Smith welcomed what he termed over 40 years of policing experience coming to the town. “Local Gardaí have seen many changes, but I know that the commitment to the town is still there.” The numbers stationed in Roscrea are now close to what they were in 2008, he said.

Cllr Eddie Moran said he was glad that the proposed march, scheduled for next Saturday, has been called off. “The rumour got out that you were closed by night. But that's not happening. It's very important to have your doors open, and that's great news for Roscrea.”

Local activist Shane Lee said he has assurances that the door “will be left open to the public, 24 hours, for the people of Roscrea.” “I'm glad to leave it at that.” Insp. Maher said any members of the public can come to them in confidence on matter, and they are there to assist as public servants.

Cllr Smith said Mr Lee had taken “the responsible step” by calling off the protest. “It should never be a protest against the Gardaí. We all need to be united on one thing: that is to join forces and to make sure this premises is both maintained and heightened.”

Insp Maher said he wanted the message to go out to the people of Roscrea: “We are committed to this town. We're not going anywhere. We're very well aware of the issues facing the town.”

Derek Russell of 'Roscrea Stands Up', Tony Foyle, of Roscrea Scouts, and Michael Madden of the Chamber of Commerce also welcomed the new Gardaí, and pledged their support. Mr Madden urged all stakeholders to fast-track a new CCTV system for Roscrea. “That would really make a huge difference. It's something that should really be prioritised.”

“We support all the voluntary and governmental organisation who are working so tirelessly,” continued Insp. Maher, who stressed the imporantance of different groups in the town working together. The Gardaí do have the investigative ability to address complaints, and “there is a responsibility and onus on us to make sure the people of Roscrea get the service they deserve.”

Insp Maher assured PJ Wright that the preivous situation where one Garda might be left alone in the Station, unable to responed to a robbery, would not continue. Six new Gardaí have come to the Tipperary Division, and this manpower will give Roscrea back-up to deal with emergencies.

In relation to drugs and heroin, Insp Maher said he is satisfied that the situation is under control. Members of the public who feel they are being intimidated by drug dealers can approach Gardaí on a confidential basis. Gardaí are also liaising closely with the Mid-Western Drugs Task Force, and local community groups and residents associations.