Clonmel engineering student takes on the competition in Canada 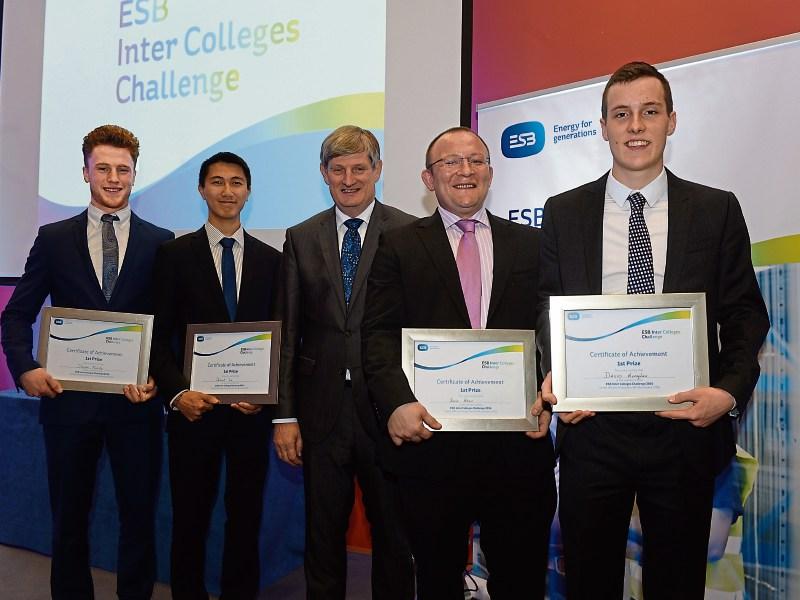 Above: Students from the University of Limerick are pictured with Pat O'Doherty, Chief Executive of ESB, after they claimed the top prize at the ESB Inter Colleges Challenge last November. Pictured left to right is Darren Fehilly, Patrick Lu, Pat O'Doherty, ESB, Eoin Hann and David Monaghan.

A Clonmel  engineering student travels to Canada this week to compete against counterparts from 12 international institutions in an engineering and commerce competition.

Darren Fehily from Clonmel will join his three University of Limerick team members as they undertake three gruelling tasks over the course of five days (February 28 to March 4) at the Engineering and Commerce Case Competition (ECC) in Montreal.

The team was selected to represent Ireland following their win in the ESB Inter Colleges Challenge last November. During that task, the team researched and designed a complex engineering and financial energy challenge in just seven hours.

As well as this sponsored trip to Montreal to participate in the competition, ESB also offered Darren and the other winning team members a paid placement within the company.

For now, the second year mechanical engineering student is focused on taking on teams from Canada, U.S and Saudi Arabia. The University of Limerick team is proudly flying the flag for both Ireland and Europe in this reputable competition which is hosted at the renowned Université Concordia. The aim of the competition is to find solutions to real-world challenges that modern industries face.

Wishing the team luck before they depart for Canada, Pat O’Doherty, Chief Executive of ESB, said: ”Such competitions offer Darren and his University of Limerick team members a great opportunity to showcase their skills and understanding of real engineering and consumer challenges. ESB is proud to sponsor the team’s efforts in Montreal and we wish them every success as they proudly represent their university, their respective counties, Ireland and Europe.”

Dr. Vanessa Egan, Lecturer in Mechanical Engineering and team coach for this competition, says: “The University of Limerick team is looking forward to travelling to Montreal for the Engineering and Commerce Case Competition. This is very exciting opportunity for these undergraduate students who have been preparing for the last two months and who are looking forward to the challenge.”