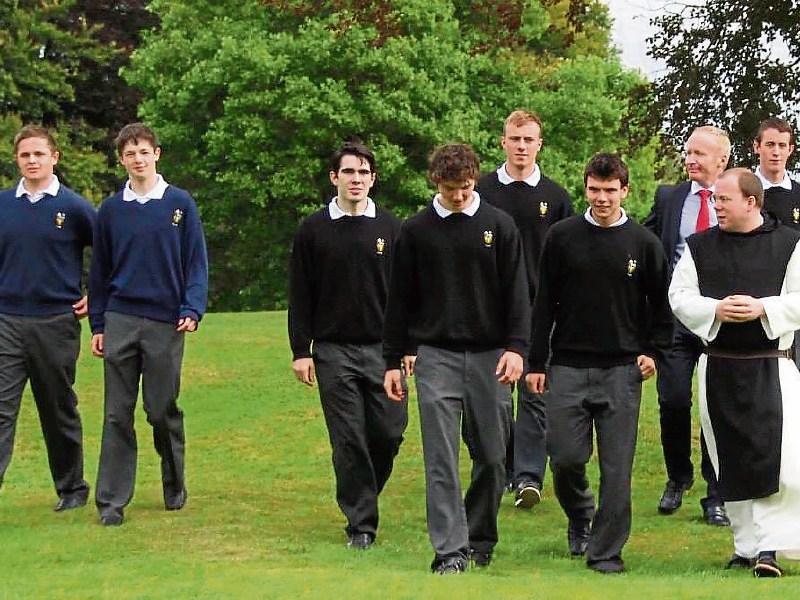 bbot Dom Richard with a group of students, in the grounds of Roscrea's famous Cistercian College, alma mater to Taoiseach Brian Cowen.

On Friday 17 th February, the students, parents, staff and alumni of Cistercian College Roscrea were inshock as it was announced that the school, which had been founded in 1905, would close at the end of this academic year.

Within days of the announcement, an open meeting was called and in a packed County Arms Hotel in Birr, the CCR Action Group was set up with a very clear mandate - to find a way to not only keep the school open, but to develop a viable, self-sustaining and successful model for the future.

Working closely with the school’s trustee Abbot Dom Richard Purcell, the action group set about detailing the impacting issues and the opportunities to readdress these in a new business approach.

The action group, which is made up of parents and past pupils with a wide range of professional skills to take on the challenging brief, have engaged with a hugely responsive wider community in delivering significant fundraising, volunteering and enrolment commitments in the short space of time involved.

The desire from all for action is understandable. Cistercian College has been one of the country’s leading schools in recent years. Not only does the school consistently rank among the top 10 academic schools in the country but it has also won the Leinster Schools Senior Cup in Rugby and All Ireland Schools Hurling title in the very recent past. Music has always been a strong feature in the school and the annual musicals and carol services are always hugely popular participatory events.

However, the most striking image to emerge from the decision to close was undoubtedly that of the students themselves, who were overcome with sadness. This is clearly a place where young men thrive in a homely environment, surrounded by friendship and excellence. The progress over the following two weeks has been incredible. Although a sizeable fundraising target remains to be achieved, the funds raised so far are well ahead of projections and it is hoped that correspondence sent to past pupils of the school last week will draw further donations. The group has set up the e-mail account saveccr@outlook.com so that donors can make pledges in confidence. The action group is also working to model new structures for the school, adding options that are more suited to the evolved schooling market. These include day boarding and 5 or 6 day boarding as well as the existing 7 day boarding. The group has invited expressions of enrolment interest fromprospective students and their parents via a survey on https://www.surveymonkey.com/r/8TFHPBL

Abbott Dom Richard has been hugely supportive of the efforts being made by the action group and has facilitated all of their work. The group held an extended meeting over the weekend and it is understood that a very encouraging update will be given to parents. Dom Richard has agreed to make an announcement about the future of the school before students return after the St. Patrick's Day weekend.