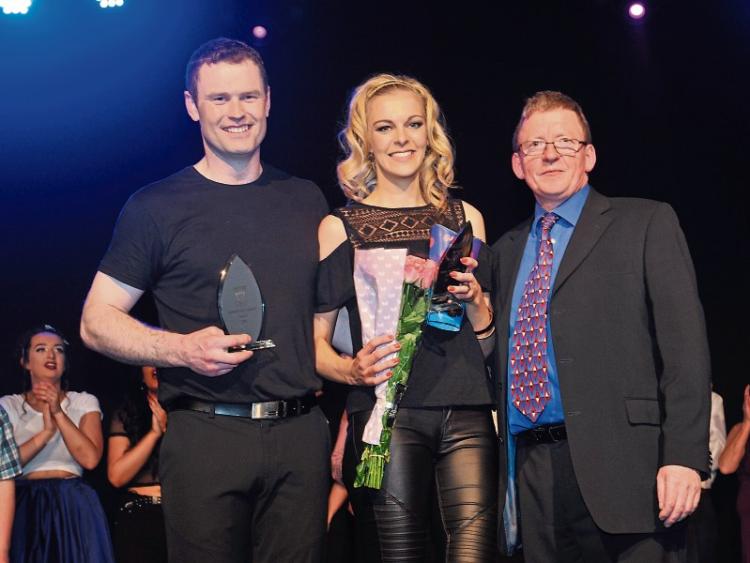 Winning couple Roisin Crowe and Eamon Cahill on the night

All eyes were on Killenaule last week as 18 couples cha cha-ed, shimmied, waltzed and tangoed their way to the Dome in Thurles on Saturday night in aid of Scoil Ruain's autism unit.

Ten weeks of blood, sweat and tears paid off as the fancy footwork of the intrepid dancers of Killenaule, Ballingarry and Mullinahone were put to the test.

Master of ceremonies on the night was Ireland AM presenter  Brendan Hennessy who entertained and charmed the masses of past and present pupils, parents and staff who filled the hall.

While  Paul Kelly was transformed into Killenaule's version of Patrick  Swayze performing to 'Dirty Dancing' alongside Marion Walzer,  Irene Hayes and P.J. O’Dwyer proved they could compete with any Rolling Stone dancing to 'Moves like Jagger.'

Elsewhere on the dancefloor Fiona Lawlor and Liam Fitzgerald shimmied to the late Whitney Houston hit ' I Want to Dance with Somebody', Margaret O’Neill and Brian Cullivan busted a move to 'Wagon Wheel' and Carol Delaney and Darragh Blake performed a beautiful routine to Ed Sheeran's  'Thinking out Loud' however  the judging panel ultimately decided that Roisin Crowe and Eamon Cahill  had the moves of the night after an energetic performance as Sandra Dee and Danny Zuko to 'Grease.'

The winners were presented with a beautiful piece of glassware while all  participating dancers received an engraved silver plate as a souvenir of the occasion.

At the time of going to press a total of €35,000 and counting had been raised for the schools autism unit Coiscèim, meaning footsteps, which opened in 2015. The school has recently been sanctioned to  build a new state of the art autism unit with all proceeds raised from the Strictly night being used to equip the new project.

The organising committee would like to acknowledge and sincerely thank all the businesses and individuals who provided sponsorship, donated raffle prizes, purchased tickets to attend, voted for the contestants and anyone who helped in any way.

They also wish to thank Nicola Purcell of Dance Republic Carlow and her team for their expertise and patience  over the past 10 weeks.

And last but not least the commitment of the dancers who freely gave of their time to be part of this extremely worthwhile event.