Hopes for repatriation of body of Tipperary man hanged for murder 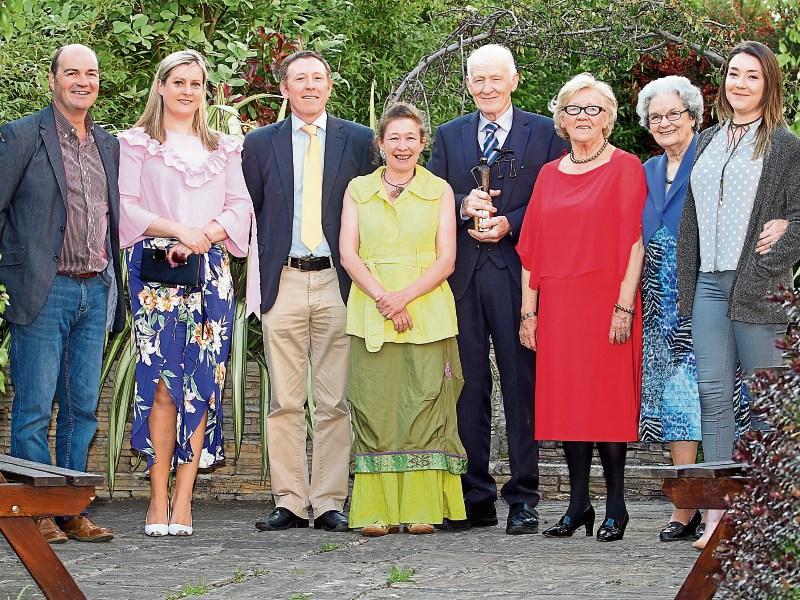 Hopes that the presentation of the Tipperary Association Dublin Hall of Fame Award for 2016 to Mr Eddie Dalton of Golden will lead to the repatriation of the body of Harry Gleeson, was expressed at the award ceremony on Friday night last.

Mr. Dalton had been selected for the award in recognition of his groundbreaking research, leading to the final granting of a posthumous pardon to Harry Gleeson in January 2016.

Reading the award citation, Mr. Pat Ryan, Secretary of the Tipperary Association, Dublin recalled how, in April 1941 Mary McCarthy had been murdered in Marlhill and her nearest neighbour Harry Gleeson, a native of Holycross, had been convicted and hanged for her murder. Harry had gone to the gallows with immense fortitude and dignity but firmly protested his innocence right up to the end and his last wish to his legal team was to have his name cleared.

“Many people down through the years worked hard to clear Harry’s name and I mention in particular the family and descendants of Harry Gleeson, the Justice for Harry Gleeson Group, the Innocence Project, the authors of two books on the case Marcus de Búrca and Kieran Fagan, and of course Eddie Dalton. Not alone was Eddie convinced of Harry Gleeson’s innocence, but he set out to do something about it. For well in excess of forty years, Eddie Dalton, consumed by the conviction of the injustice that had been done to Harry, set about proving his innocence.

“ By the early 1980s, he had tracked down all the crucial witnesses at Harry’s trial. One had worked at Feehan’s Hardware Store, Cashel. He gave Dalton a tip-off in 1983 that the firearms register had been altered on the day Mary McCarthy’s body was discovered in a systematic attempt to incriminate Harry.”

Above all, said, Mr. Ryan, it was the discovery of the Firearms Register that re-opened Harry Gleeson’s case and led to the final granting of his pardon. “The efforts for Harry conducted by Eddie Dalton have been far-reaching, time-consuming, exhaustive and critical. The granting of the posthumous pardon by the State marks a milestone in Irish legal history”.

Mr. Ryan said it was neither popular not profitable for Eddie Dalton to pursue the cause of Harry Gleeson, living as he did in the very community where these terrible events occurred “which makes his efforts all the more heroic. It seems fitting then to mark that milestone event by granting a lifetime achievement award to Mr Eddie Dalton whose research has led without question to this final outcome”.

Accepting the award, Mr. Dalton recalled how Harry Gleeson had been hanged on the 23rd of April 1941, when his last words to his Barrister, Sean McBride, had been 'I rely on you to clear my name. I have no confession to make only I did not do it'. Mr. Dalton said as a young lad sitting at the fire he had heard a conversation between his father and a Garda, The Garda had mentioned briefly something about the time of the murder and Mr. Dalton's father had replied 'that man was innocent'.

The Hall of Fame recipient said there had been many debates in the years that followed and in approximately 1978 Liam O'Duibhir had made contact with him. Mr. O'Duibhir asked if he knew much about Harry Gleeson and Mr. Dalton told him about his father's firm conviction that he was innocent. He stated that he had taken a deeper interest from then on.

He recalled the late William O'Connor who had given hours teasing out the finer points of the case. When, he said, he had shown Mr. O'Connor the Firearms Register “Bill had written his own account of the trial, 'The Farsical Trial of Harry Gleeson'”.

"I spoke at length with Sean McBride. He was convinced of Harry Gleeson's innocence. Michael Leamy of Cashel had told me about the Firearms Register and when I located it I was amazed it had survived. Marcus deBurca deserves praise for his balanced account, 'Murder at Marlhill'".

Mr. Dalton said Marcus de Burca had made a big case to re-open the case with three Ministers for Justice and in January 2012 Bernadette O'Gorman had given a lengthy phone in to Tipp FM. Listening to this had been a distant Gleeson cousin Ollie Delaney, who had contacted his brother Sean. He asked for a round of applause for Bernadette O'Gorman as had she not pursued the matter at every opportunity he doubted if the case would have been pursued much further.

He also singled out for praise the Justice for Harry Gleeson Group..

He thanked Dr. Michael Casey for proposing him for the Hall of Fame award and the Tipperary Association Dublin for granting it. "This is not just to me but to all the people down the years, about 30 people, who gave their time and dedication to my questions and queries on the case."

He mentioned in particular the late John Timmoney, Solicitor for Harry Glesson, who had worked against desperate odds but "they were blocked at every opportunity", he said.

He also recalled how the Tipperary Association had collected over 500 signatures which Bernadette O'Gorman had deposited in the County Library in Thurles. Mr. Dalton also praised the Irish Innocence Project, who had pursued the case, and former Minister Tom Hayes.

He added that the campaign had not completely ended as they still wanted to repatriate the body of Harry Gleeson. "Hopefully this tonight will achieve that final act".

He was presented with his award by Mr. Liam Ahearn of the Palace Bar, sponsors of the prize.