Darkness Into Light proves an outstanding event in Thurles 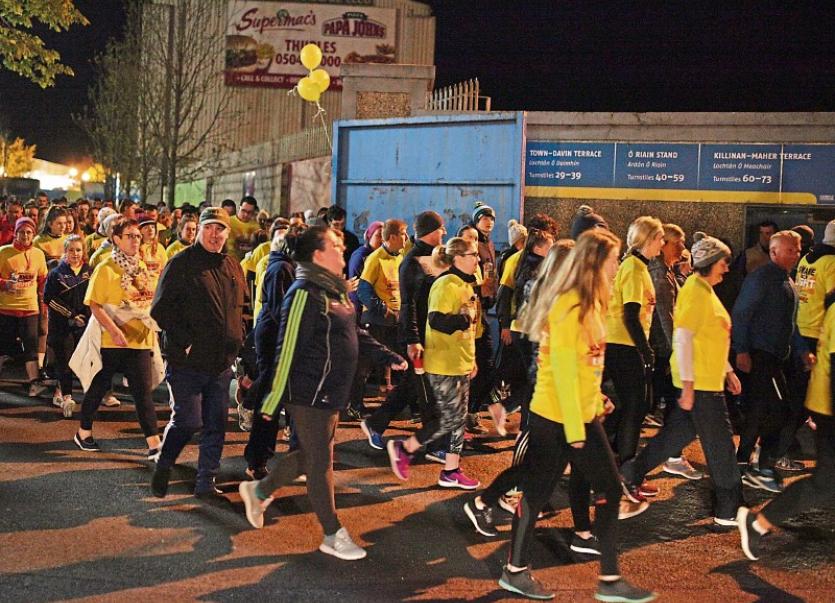 Up to 2,300 people pounded the streets of Thurles town in the early hours of Saturday morning as the inaugural Darkness Into Light proved an outstanding success - way beyond the expectations of the organisers.

Everyone who participated had a reason for being there and while the essential message was one of positive mental health and the fight to create more awareness about suicide, the resounding support of the community for those in need of a pick-me-up was deafening. The atmosphere was magnificent as they came from every corner of the parish and from many of the surrounding areas to be part of a movement  which is really taking a grip nationwide and globally.

Thurles was just one of the 150 centres nationwide to stage a Darkness Into Light event and en-route around the Cathedral Town it was poignant to note the many homes, shops, business premises, clubs and organisations which have been touched by suicide and mental health issues. This event was an effort to raise awareness and that it did in a very positive manner.

The Dome at Semple Stadium has seen many celebrations in it's short life so far, with the fabled exhibitions of our national pastimes being central among them. However, Saturday evening was different. On this occasion the gates of Semple Stadium were opened wide to all upon their return from the 5km route and the refreshments served were very welcome. Even more welcome though was the chat and interaction with so many others who had made the pilgrimage too - and pilgrimage it was. It's one thing to run or walk 5km - it's another thing entirely to rise for 4:15am and run or walk 5km.

"The attendance was far beyond our wildest expectations and we were thrilled with the way it all worked out," said Jonathan Gleeson, chief organiser of the Thurles Darkness Into Light event.

"We had hoped for about 800, or maybe even 1,000. But we were more than double that figure and considering all those who turned up on the night and participated, we ended up having close to 2,300," he said.

Jonathan was lavish in his praise for all those who took part, and also for those who helped out with the organising of the event. There were in the region of fifty helpers involved on the night, including at all of the thirteen stewarding points, nine of which were manned by motorcyclists.  And, The Dome proved to be the perfect location for registration, gathering and of course the official opening by Tipperary Rose of Tralee, Sheila Ryan, a psychiatric nurse by profession who spoke at the outset about the importance of positive mental health.

The route took participants from The Dome, over the Jimmy Doyle Bridge, in by the Templemore Road, O'Donovan Rossa Street onto Liberty Square and Slievenamon Road, and then onto Clongour, Stradavoher, Inisfallen, Iona and Butler Avenues, before crossing onto Matthew and Castle Avenue, and back up to The Dome via Upper Parnell Street and Castlemeadows.  Everywhere you looked there was an encouraging smile, a greeting and somebody to offer encouragement.

Participants were offering up their efforts; remembering departed loved ones; hoping for those in pain; moving in solidarity with those struggling; and shining a light into a dark place where only those present can understand.

As dawn broke and the birds began to sing, a new day was born with the fresh, crisp air cleansing the spirit and breathing new life into legs of the runners and walkers. They had indeed physically moved from darkness into light - the hope is that mentally, the same can be true. Those who organised, participated and initiated this great event for Pieta House can indeed take a well deserved bow.