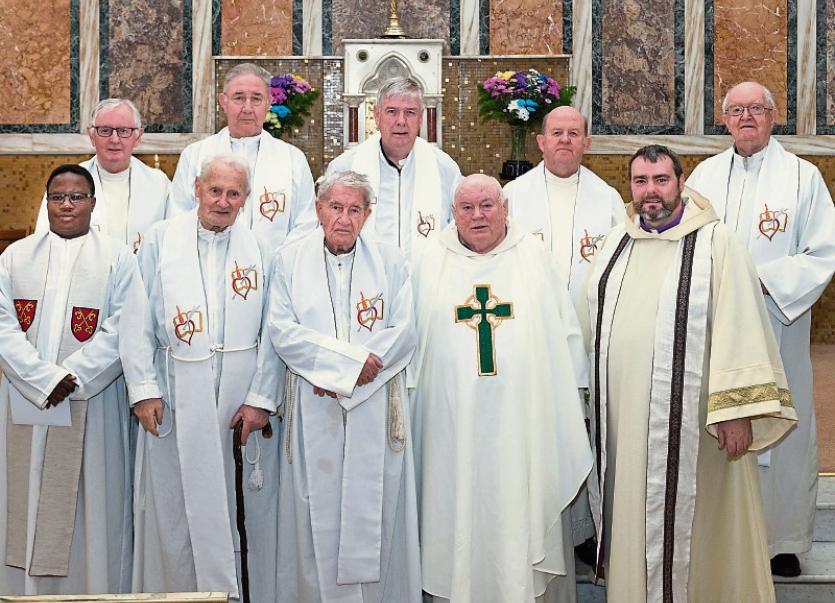 The parish of Fethard & Killusty congratulates Fr. Martin Crean OSA who celebrated the Golden Jubilee Mass of his Ordination in the Augustinian Abbey Fethard on Sunday, April 30.

Fr. Martin was joined by family members and friends at this special concelebrated mass and afterwards at a reception held in Hotel Minella. Many Augustinian priests that worked with Fr Martin during his ministry in Africa and Ireland were also present to extend their good wishes.

Fr. Crean was born in Limerick City on May 12, 1941, and baptised in the Parish of St. Marys. His primary and secondary school education commenced at CBS, Sexton Street, Limerick, and from 3rd Year at the Augustinian, Good Council College, New Ross. He entered the Augustinian Novitiate, Orlagh, Templeogue, Dublin, in August 1960 and was solemnly professed at Ballyboden on September 16, 1964. He later studied theology at the Pontifical Gregorian University in Rome and was ordained on March 11, 1967.

The following year, January 4, 1968, Fr. Crean was appointed to the Diocese of Maiduguri, Nigeria, to work as a missionary. His first Parish Priest was the late Fr. Timmy Walsh OSA, who worked in the Dioceses of Maiduguri for over 25 years and later returned to the Abbey in Fethard up to his death on April 22, 2011.

After ministering in eight different parishes in Nigeria, Fr. Martin was appointed administrator of the Cathedral under Irish Augustinian Bishop Timothy Cotter – an inspirational figure that Fr. Martin looked up to as a fatherly figure.

In September 1997, Fr. Martin was chosen to open a new Augustinian parish in Lagos, where his senior curate, Fr. Tony Egan OSA, is the now current Prior of Fethard, residing in Dungarvan. Following the successful setting up of the parish, Fr. Crean was recalled to head a parish in the city of Maiduguri, originally opened fifteen years earlier by Fr. Justin Hanley OSA from Moyglass.

Fr. Martin spent eight years in this parish, the, “best years of his life”, he recalls, when he had sixty-three altar servers. Thirteen of these were later ordained Augustinian priests for the diocese. Fr. Martin also enjoyed the support of a twenty-four strong parish council to help administer the work in the parish.

Finally Fr. Martin sought the Augustinian way of life and requested the Augustinian Vice-Provincial, Fr. James Daman, to appoint him to an Augustinian Community. This was his stepping-stone to coming home to Ireland on July 22, 2001, after which he was appointed to Cork Community on September 4, 2001, where he served up to his transfer to Fethard on September 1, 2009.