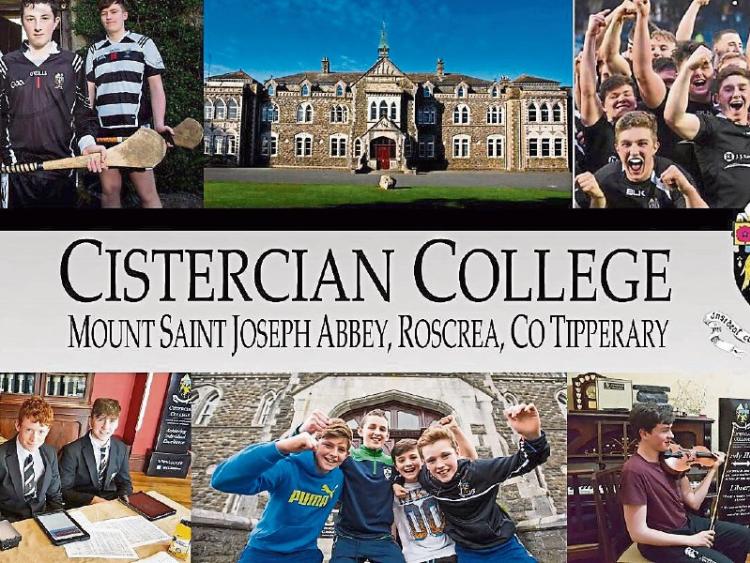 Cistercian College Roscrea has announced that a number of significant scholarships will be made available to candidates starting in September 2017, thanks to hugely generous contributions from Past Pupils.

The scholarships will be awarded for excellence in academics, music, hurling and rugby and are available to potential 7-Day, 5-Day and Day Boarders. The value of awards can be as much as 50% of the annual fees and so it is expected that there will be widespread interest with applications being accepted from today.

Cistercian College is situated in the stunning setting of Mount Saint Joseph Abbey, only five minutes from the M7 motorway. The school which has regularly ranked among Ireland’s top ten institutions for academic results and boasts an impressive musical department has recently won the Leinster Rugby School’s Senior Cup and All Ireland School’s hurling title. This holistic approach to education and personal development has meant that CCR has continuously produced well rounded and successful young men, and it is many of these Past Pupils who have made the donations that will fund these scholarships.

These contributions are seen as a hugely significant expression of belief in the school’s ability to continue providing the highest standards in schooling. Earlier this year it had been announced that Cistercian College would close due to falling numbers, but a new business plan developed by a group of parents and Past Pupils was accepted by the trustees. This business plan included the addition of 5-Day Boarding and Day Boarding options along with 7-Day Boarding which had been the only option available to students for the previous 112 years. Day Boarding runs from 8.30am to 8.00pm every day with students joining boarders for meals, sports and study as well as classes. These changes have led to huge interest in the school, and it is now expected that student numbers will rise to peak levels over the coming years.

The confidence in the school’s future demonstrated by these ‘Pastmen’ and their investment in the scholarships has also been matched by other Past Pupils and parents who have committed over €1.8 million to ensure against any short term shortfall in funds and also to invest in the school’s facilities. Chairperson of the Admissions Sub Committee Inez Heenan, who’s son Manus is a third year student in CCR, says that her son’s love of the school is what drove her to become involved. “Manus has fallen in love with CCR. He plays for the school’s Junior Cup rugby team, is a member of the orchestra and he has also been a part of the school’s musical production every year. But above all it is the other boys, the sense of community and the commitment of all the school staff that has made this such a wonderful experience for him”.

Another recent development in the school has been the appointment of a new, vibrant board of management. Ronnie Culliton, a Past Pupil and father of two current students Lúc and Cuan, is the chairman of this board and is hoping that these scholarships will allow some deserving candidates the opportunity to experience what Roscrea has to offer: “There is something really special about this place. Something about the ethos, the togetherness and the constant activity that makes boys want to be here. A wonderful by-product of that is the fact that it allows boys to become the very best version of themselves”. Cistercian College are inviting expressions of interest in these scholarships by contacting Séamus Hennessy on 086 8666387 or admissions@ccr.ie