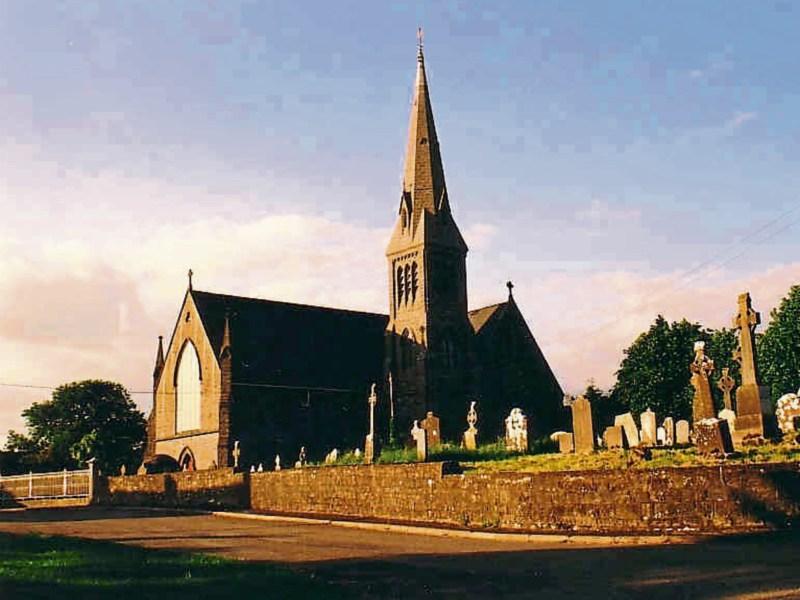 Hundreds of mourners packed into the Church of St. Nicholas in Solohead, County Tipperary this morning for the funeral of baby Chloe Fogarty who passed away in a tragic accident last Thursday.

The church was filled to capacity with many mourners lining the yard outside to pay their final respects to Chloe who would have turned eight months old tomorrow.

In a heartbreaking tribute to her only child Chloe's mother Louise stood before the crowd with her husband Paul by her side and told those present how little Chloe's face could light up every room, bringing an instantaneous smile to the face of everyone she met.

"You switched on a happiness in us that we never knew we had," she said, adding that every day was a cherished gift, and "never taken for granted."

She described Chloe's wonderful inquisitive nature and how she would fill with joy when she saw each of her little friends arrive to creche.

She told the packed congregation that the couple would stay strong together as it is "what you (Chloe) would have wanted."

Only two years earlier Chloe's parents had stood in front of the altar of St. Nicholas Church, Solohead to celebrate their wedding vows, returning to the church last February for Chloe's christening.

Parish Priest Fr John Morris read some of the many messages of condolences posted to the RIP.ie website adding that the entire country was praying for little Chloe.

During the funeral procession, gifts representing Chloe's love of swimming were brought to the altar. A swimming togs and bath toys were carried to the altar by family members alongside a book of nursery rhymes including Row Row Row Your Boat -  a story which Chloe never tired of hearing read to her by her loving parents.

The heartbroken mum also described finding an "artifical flower petal" in Chloe's room in the days following her death explaining how it did not belong to anything in the house. She said the couple believed it was a sign that Chloe was still with them.

During the Prayers of the Faithful, prayers were also offered for the work of the emergency services. 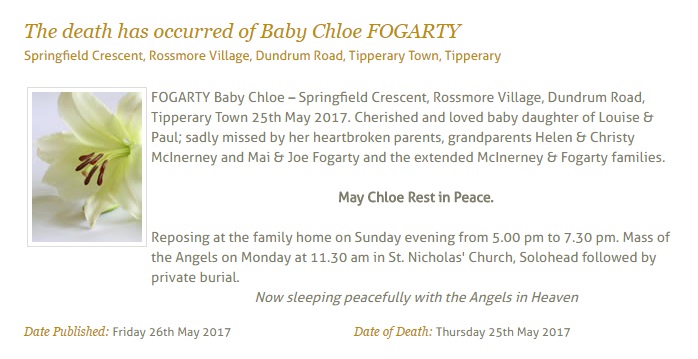 Chloe of Springfield Crescent, Rossmore Village, Dundrum Road, Tipperary Town, was pronounced dead in University Hospital Limerick on Thursday afternoon last after she had been found in an unresponsive state in a car in Dundrum at 1.45pm. It is understood that baby Chloe had been in the car for a number of hours. It is believed that Mr. Fogarty was distracted by a phone call as he got out of his car and was unaware he had left her in the vehicle. He had been due to drop Chloe off at a creche.  When Mr. Fogarty returned to the car he found Chloe unresponsive. She was airlifted from Kickham's GAA field to University Hospital Limerick however doctors were unable to save the infant.

She was cherished and loved baby daughter of Louise & Paul and is sadly missed by her heartbroken parents, grandparents Helen & Christy McInerney and Mai & Joe Fogarty and the extended McInerney & Fogarty families.

Reposing took place at the family home on Sunday evening when hundreds of mourners came to sympathise with the heartbroken family.