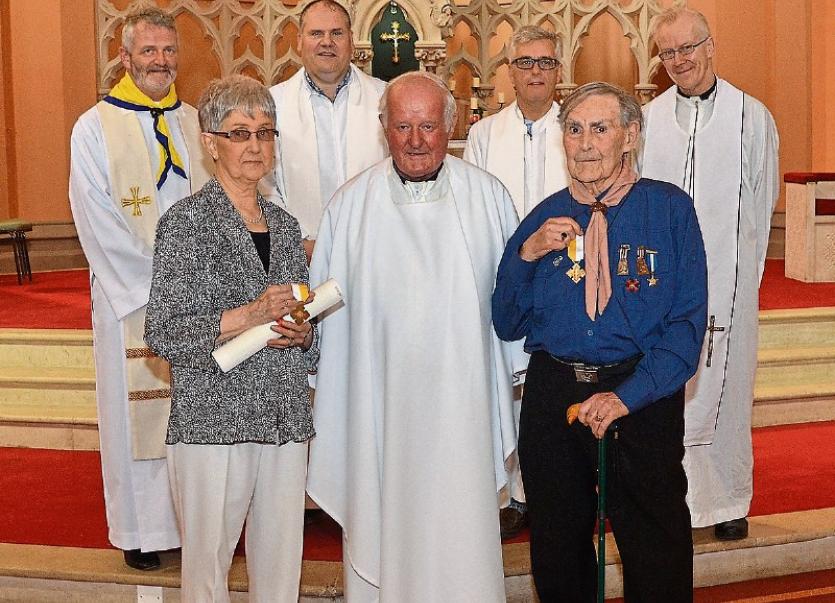 Benemerenti medals were presented to exceptional parishoners for their contribution to community and parish life in North Tipperary at a special ceremony held in Roscrea last week.

Eileen Moloney and Gary Morrissey received the  Benemerenti Medal - an honour awarded by the Pope to members of the clergy and laity for service to the Catholic Church- at a special ceremony last week in Roscrea.

During the presentation, Fr Tom Corbett explained why Eileen and Gary were such deserving recipients of the papal medal.

“Eileen Moloney has given herself, her time and gifts to our Parish choir and community for a lifetime.  She joined the choir of St. Cronan’s  in 1948.  Her voice filled our church and her presence enhanced our choir.  She served under  seven organists and is still a vibrant and  powerful voice in the gallery. Eileen was for many years a prominent  and faithful member of the parish liturgy group and read frequently at Mass.  Eileen also contributed her talents to the Roscrea Musical Society  which  is closely linked  with the parish  and served as its president over a long period. She lived her life as a loving wife and mother  with her husband Paddy who was also an active member  of the parish and together they contributed greatly to the life of our community.”

He continued: “Gary Morrissey  was born in Dungarvan but arrived in Roscrea  in 1959 to spend his life here. On his first day in Roscrea he met the love of his life Anne  whom he married in 1964 and lived a  fruitful family life for  years on Convent Hill. He joined the Parish Council at its inception  after  Vatican 11 and remained a very active member until retirement   in 2013 serving for many years as the faithful  Secretary  of  the Council  and a motivating force for good.

“Gary  played a leading role in the financial affairs of the Council;  he was  a main participant  in the organising  of a very successful draw in the early seventies.  He worked so hard with many others  that they were able to pay school bills and presented  £84,000 to Dean Cuddy: some achievement indeed. Gary served as a  reader at Mass for many years  and read in the  Monastery  for 30 years.

“Gary is very proud of his outstanding contribution to the Scouts, he entered  the Catholic Scouts at age 10 and is still  a proud and active member. He helped establish 12 new scout troupes;  he was a scout leader  and looked after them  for many years.  He was awarded the Founder’s  Medal  in 1993. As a tribute to him two priests he introduced to the Scouts  are  concelebrating  this Mass with us.”