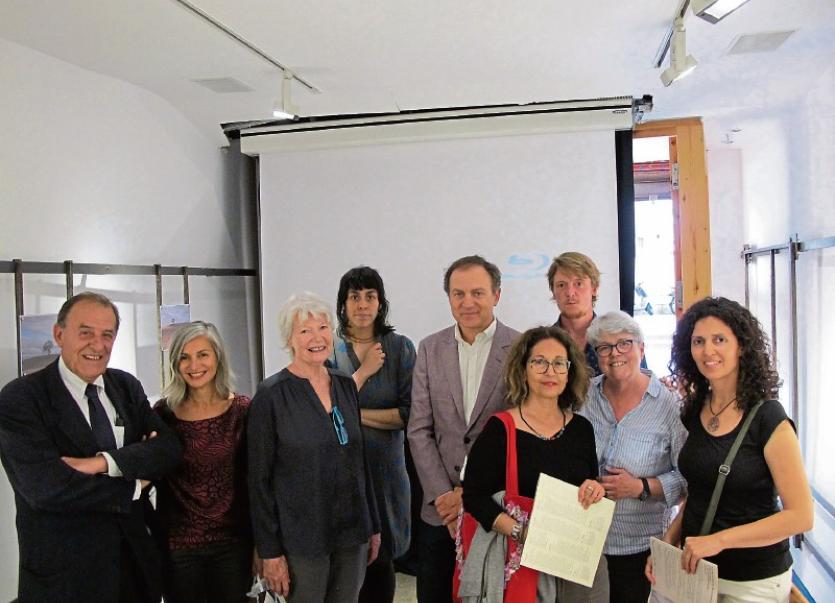 Loop Festival Barcelona 2017 with Gallery Laplace Art Space, Barcelona, celebrated the City Screening and the launch of 'Homeland’, in conjunction with Roscrea's Damer House Gallery, on May 23rd.

Damer House Gallery was set up by two artists, Patricia Hurl. Damer House has been running an annual video/short film, open submission show, ‘Homeland’, for three years, which has grown exponentially with many submissions from mainland Europe. Two years ago, Damer House Gallery linked up with Director of Loop Festival, Emilio Alvarez and Curators Natalie Foguet and Angel Garcia who run Safia art Contemporani in Barcelona, and began a collaboration which culminated in an artist exchange between Homeland and the LOOP Festival Barcelona LOOP, the Festival of the moving image, has been growing in strength to the extent that it includes International Galleries as well as all of the main gallery spaces in the city, including MNAC (Barcelona Museum of Contemporary Art) and Centre d’Art Santa Monica, La Rambla Barcelona.

This year, for the first time, Damer House Gallery have been invited to show a selection of ‘Homeland’ films in ‘Loop’. We were assigned a gallery, 'Laplace', a wonderful little Art Space run by Anne-Frank Jacquart which is located in St. Pere Mes Alt, in the old city. The films were selected by Safia art Contemporani from all of the thirty six films screened for ‘Homeland’, over the last 3 years. Eight artists were selected after a long difficult week.

The openings were staggered over a few days. ‘Laplace’ was one of four openings on a Culture trail on that particular day, with us being the first. Homeland drew a big crowd, mostly artists, many with children, spilling out onto the sunny cobbled street. Irish artist Mark Reddin attended, he is working in an artist’s collective in the city and came along in support. The exhibition was opened by the Honorary Mr. Enrique Cucurella, the Irish Envoy to Barcelona, who gave an excellent speech, mentioning the artists and extolling the virtues of Co. Tipperary, and Roscrea in particular, to the effect that Therry and Patricia told me that they had people asking them the best way to travel there! Carlos Duran, one of the two directors of ‘Loop’ also attended the opening and Andrés Vial, City Screen Co-Ordinater delivered an inspiring speech about the importance of events such as ‘Loop’ in galvanising a community spirit through art throughout the city. Andrés welcomed Damer House Gallery and introduced Mr. Enrique Cucurella, which, Therry said later, was extremely helpful in helping Damer House Gallery make a smooth transition.