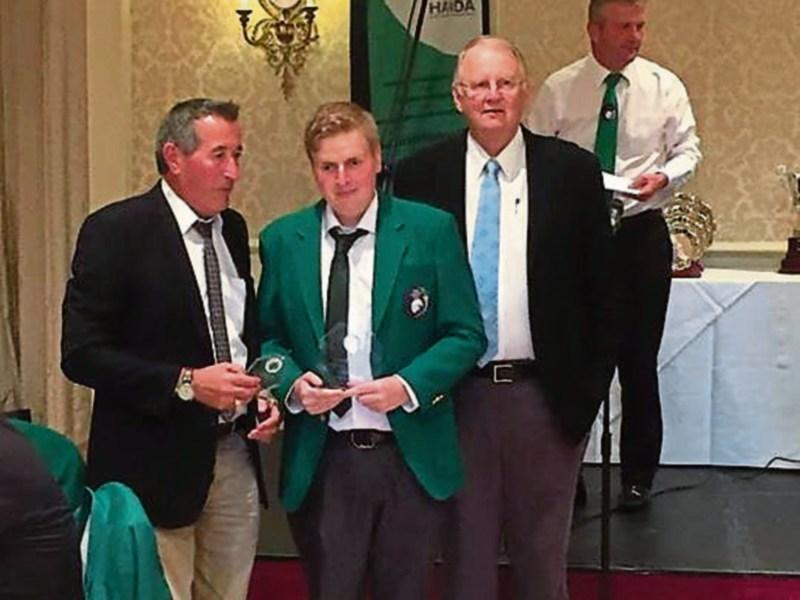 An inspirational 27 year old man who lost his sight last year has become the first ever Tipperary person to win the Irish Open Blind Golf tournament.

Darragh Stakelum from Thurles took the top honours at a glittering awards ceremony in Co. Louth last week, almost one year after losing his eyesight.

"I was absolutely delighted to win. I played in the B1 golfer category with the help of my caddy Gerry McCormack. You're divided up by your sight classification and a person with a B1 grade has the least amount of vision," says Darragh adding that he has his girlfriend Orla to thank for introducing him to the sport.

In December 2015, Darragh noticed his vision had become blurred and assumed he would need glasses. However after a visit to his local opticians Darragh was immediately sent to University Hospital Limerick for tests where doctors struggled to diagnose what was wrong.

As the weeks progressed Darragh’s vision continued to deteriorate and by April 2016 he had less than 50 percent vision.

“The doctors couldn’t figure out what was wrong at first and as the months went on my eyesight became progressively worse. By April 2016 my eyesight was very bad. I’d say I only had about 50 percent vision in the space of five months,” explains Darragh.

“It was a tough few months and a lot to take in. My life changed dramatically within a couple of months but I decided early on I would continue to do the things I wanted and not let it define me," he says.

A keen athlete and sports enthusiast growing up, Darragh found refuge on the sports field as his vision continued to deteriorate and began getting involved with NCBI sports teams.

“I was always sporty growing up, playing golf and underage with Thurles Sarsfield and Durlas Og. I felt the best thing for me was to get back out and be part of a team again,” explains Darragh who was called up to join the Irish Blind Soccer development squad after he was spotted taking part in an exhibition game in Nenagh last August.

On the soccer pitch his leadership and football skills quickly caught the attention of his coaches, leading the talented golfer to captain the Irish soccer team in two friendly games against Belgium and Hungary in June.

During his frequent trips to hospital, Darragh’s family, friends and former work colleagues bandied together to raise money to send him on a trip of a lifetime across the States.

“It was something myself and my girlfriend Orla had been thinking about doing before any problems with my vision began. They sent us off on a trip to New York and Florida before my vision was completely gone and it was one of the best experiences of my life.”

Since his diagnosis Darragh has also benefited from the support of his former school classmate and Paralympian Peter Ryan who was diagnosed with LHON at the age of 19.

“I sat beside Peter in school in the CBS and a lot of people how commented how unusual it is that we both suffered with sight loss. He’s been a great support to me since my diagnosis.”

“Some days are harder than others but everyone has bad days no matter what their situation. The way I look at it is that it’s not a disability, it’s an inability to see. I’m 27 and I do the same things as other 27 year old's. I was at Coldplay at the weekend. I'm determined to go out and live my life,” he says.