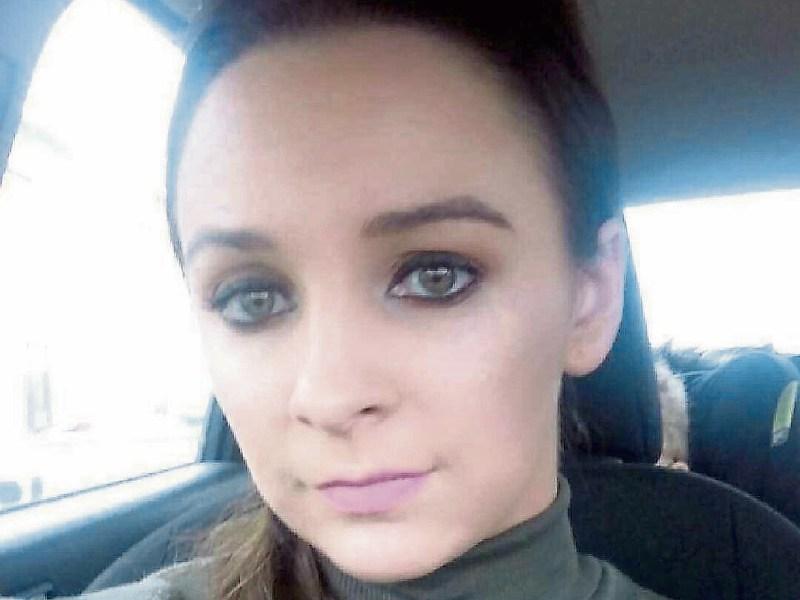 Bride-to-be Carol Fleming says the last 16 months have been 'nothing only stress' after the company behind winourwedding.ie failed to pay out

A Tipperary bride and groom have had their wedding dreams dashed after a competition based company closed before paying out the €10,000 cash prize in a 'Win Our Wedding' online vote.

Beauty therapist Carol Fleming from Drangan and her partner Dermot Molloy won a €10,000 prize through the website winourwedding.ie in March 2016 which offered to pay €10k towards their big day this August.

However last week Ms Fleming received an email from the company behind the ‘Win our Wedding’ competition to say they were “unable to pay the balance” of more than €7,000 due to “cashflow problems.”

The vote based competition saw Ms Fleming and her partner earn more than 24,000 votes as friends and family rallied to help give the young couple the wedding of their dreams.

The couple got engaged two years ago but after their son was born with a rare heart condition, Carol and Dermot pooled their resources to cover his care costs.

The couple were nominated by Ms Fleming’s sister and received thousands of votes in the competition as friends and family wanted to treat the young couple.

“The last 16 months have been a nightmare….the competition was supposed to make our lives easier and we should have been enjoying planning our big day instead this has brought nothing only stress,” Ms Fleming wrote on social media. 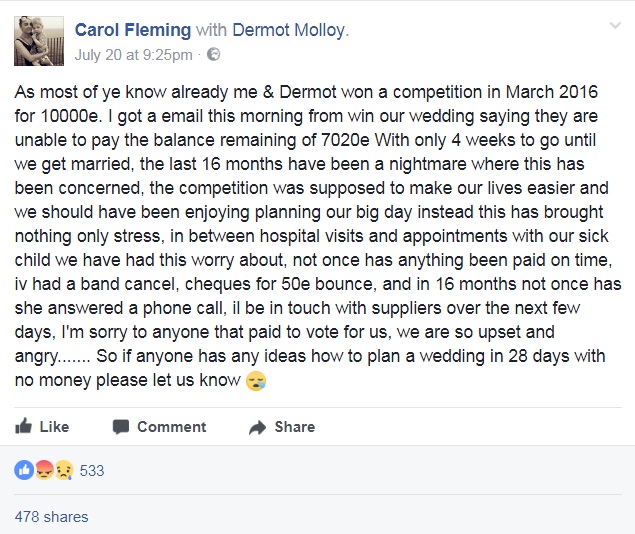 However less than a month before their big day on August 17, Ms Fleming received an email to say the company would not be able to pay the remainder of the cash prize.

While the company did pay out just over €2,800 towards the hotel bill and cake, Ms Fleming said the band that was booked to play their wedding cancelled as the deposit was never paid.

“Not once has anything been paid on time, I’ve had a band cancel, cheques for €50 bounce, and in 16 months not once has she answered a phone call….I'm sorry to anyone that paid to vote for us, we are so upset and angry,”added Ms Fleming.

Since Ms Fleming's message on social media last week, the post has gone viral with many people offering their services free of charge including make up artists, bakers, videographers and florists.

In a statement to the Irish Examiner owner of winourwedding.ie, Elaine Whitney,  explained she had no option but to close the company due to cashflow problems.

The Dublin based company, which started in 2013, ran competitions offering weddings worth €20,000.

However Ms Whitney said that the company fell into debt but that she continued running competitions to try to make money to pay for the prizes. Each vote in the competition cost €1.25 however it was also possible to purchase multiple votes in bundles for €2.50 and €5.

“There are two things I’m guilty of, one is not closing the company in 2016 and the other is letting couples down. I am absolutely heartbroken,” Ms Whitney said.