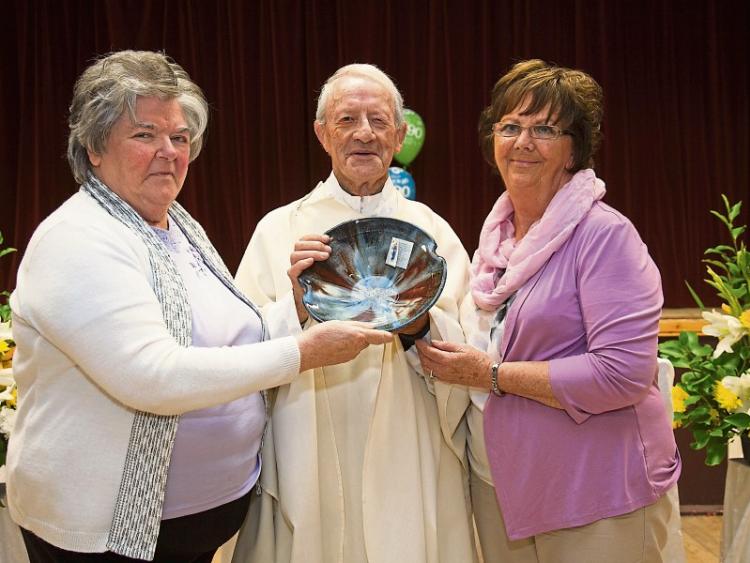 The people of Cashel and Rosegreen recently celebrated the occasion of Monsignor James Ryan's 90th year, in Halla Na Féile, Cashel, (August 18th). Mass was celebrated at 7.30pm, followed by refreshments and music.

Mr James Devitt acted as Master of Ceremonies at the celebrations, with the celebration of Mass by Monsignor James Ryan himself, attended by 17 Concelebrants, and mostly Priests who had served under him when he was Dean of Cashel.

During the Mass, sacred music was sung by the combined choir of Cashel and Rosegreen, accompanied by Oliver Corbett, the St. Patrick’s Brass and Reed Band, all adding to the solemnity of the occasion with their lovely music.

Séan O’Duibhir of Main Street, Cashel, gave a brief resumé of the life of Monsignor Ryan, spanning nine decades. “I’d like to extend a hearty Céad Míle Fáilte to you all on this joyous occasion and especially to Very Reverend Monsignor James Ryan,” said Mr O’Duibhir.

“Born in Newport Co. Tipperary 90 years ago Msg. Ryan received his early education in Newport N.S. and proceeded to Sexton Street C.B.S. in Limerick 10 miles away by bicycle. Having left school he embarked on a career in the Priesthood, before spending seven years in Maynooth, followed by two years in Rome, where he continued his studies and the extracurricular activity of wine tasting.

“Msg Ryan was ordained in 1953 and continued his studies, before returning in 1955 to Dundrum, where he acted as Chaplain to the Nuns there. Regretfully there was no golf course there then. After two years, Msg Ryan continued on to St Patrick’s College, Thurles, and became a Professor of Scripture. Msg Ryan also acted as Secretary to Archbishop Dr Thomas Morris. “A perk of this position was a seat in the Ard Comhairle at Croke Park for all All Irelands, as Dr Morris was a Patron of the GAA”.

Monsignor Ryan enjoys many pastimes, including Cards, Hurling, and Golf.

“A few years ago, my wife Ann met the Monsignor in Thurles Golf Club, and enquired if he played nine holes that day,” said Séan O’Duibhir.

“A bit taken aback, the Monsignor replied ‘of course I played 18 holes’”.

The Monsignor is a renowned linguist of note, studying German, Greek, Hebrew “ and the ancient language of Our Lord, Aramaic.”

Msg Ryan spent some 32 years in St Patrick’s College before coming to Cashel in 1988 as Dean: “the rest is history well known to all of us here,” added Mr O’Duibhir.

The Monsignor retired in 2003 and now functions as an Associate Pastor. A special thanks too to Inspector Eddie Golden, who provided the wonderful music for the dance, which concluded a most enjoyable evening.