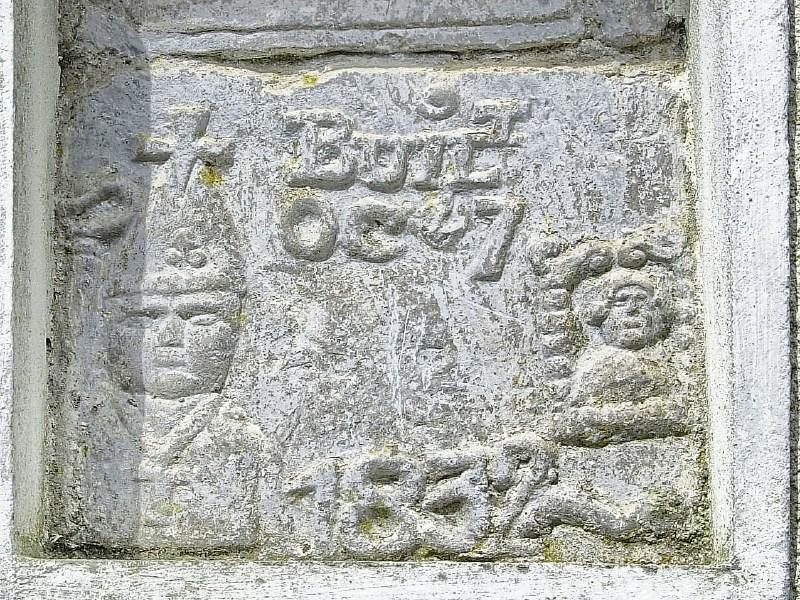 As part of the Fethard Historical Society’s celebration of Heritage Week 2017, archaeologist Dr Louise Nugent welcomed a crowd of forty or so to her walkabout in Fethard last Thursday night as she explored the stone-carved heritage of Fethard.

Louise began her walk at the Town Hall where she spoke about the three heraldic plaques that adorn the façade of the 17th century building: the Everard foundation plaque, the arms of John and Amy Everard (the benefactors of the original Alms House), and the arms of the Butlers of Dunboyne, who lived in Kiltinan castle.

The group then made its way down to the carved doorway on Main Street, that is the entrance to David Gorey’s studio. Louise sees this type of craftsmanship as very much a continuum of the folk art that evolved in the 18th and 19th centuries. Today, modern craftsmen like David draw on those stories and motifs from the past, reinterpreting them in a new way for the present generation.

The stone carving of a two-tailed cat beside the doorway led Louise onto tales of the Gobán Saor, a well-known figure in Irish folklore, whose origins reach back to the time of the ancient Celtic gods but who appears in tales from every century as a master craftsman with a hint of the rogue about him.

In Chapel Lane there is a most interesting recessed carving which in fact incorporates two different pieces, one above the other. The first is a simple name plate inscribed ‘Russel’. The second piece, dating from the 18th century depicts a bishop, possibly St. Patrick, the origins of which are still unknown.

The Abbey Church, founded in 1305, was the final port of call on Dr. Nugent’s fascinating tour and here the focus was on Mason’s Marks. The practice in medieval times was for individual master stone carvers or masons, as they were known, to inscribe their work with a symbol particular to them. Nowadays that allows historians to identify the work of ancient master craftsmen and to trace their travels from one location to another.

In the Abbey, there is a proliferation of such mason’s marks to be found in and around the 15th century arches beside the main altar. While 13th century mason’s marks were usually made of just simple lines or hatchings, these 1400 examples are much more elaborate: interlaced stars, Celtic knots, a three-leafed sprig and an elegant, long-fingered hand among others.