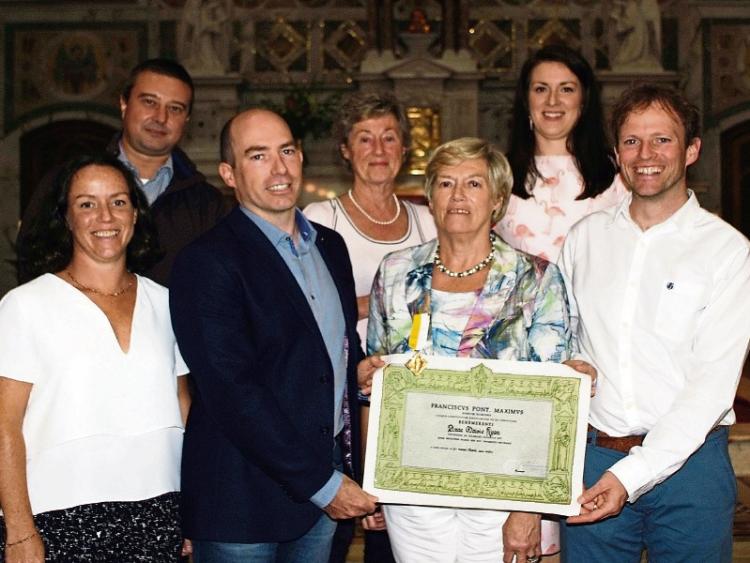 The Parish Secretary of Cashel & Rosegreen has been awarded one of the highest honours that can be accorded by the Catholic Church. Maisie Ryan, of Boherclough, Cashel, was presented with the Benemerenti Medal at Saturday Mass in Cashel - a rare honour awarded by the Pope to members of the clergy and laity for service to the Catholic Church.

The Benemerenti Medal is only given to those who have given “long and distinguished service,” explained Parish Priest Fr Christy O’Dwyer. The last person to receive such an honour was nearly 10 years ago. Parish Secretary Maisie Ryan received the accolade at the end of the 6.30pm Mass in the presence of her friends and family, sons Noel and Frank, daughter Emma, sister Kathleen, and in-laws.

The current version of the Benemerenti Medal was designed by Pope Paul VI. The medal is a gold Greek Cross depicting Christ with his hand raised in blessing. On the left arm of the cross is the tiara and crossed keys symbol of the papacy. On the right arm is the coat of arms of the current Pope. The medal is suspended from a yellow and white ribbon, the colors of the Papacy.

The Benemerenti Medal comes with a specially decorated framed scroll parchment, and a little pin with a replica of the medal. “It is rarely given,” said Fr O’Dwyer. “It’s only given for extremely distinguished service.” Maisie Ryan is the “public and friendly face of the Parish of Cashel. We were delighted to give it to her. If anyone deserves a Benemerenti Medal, Maisie does.”