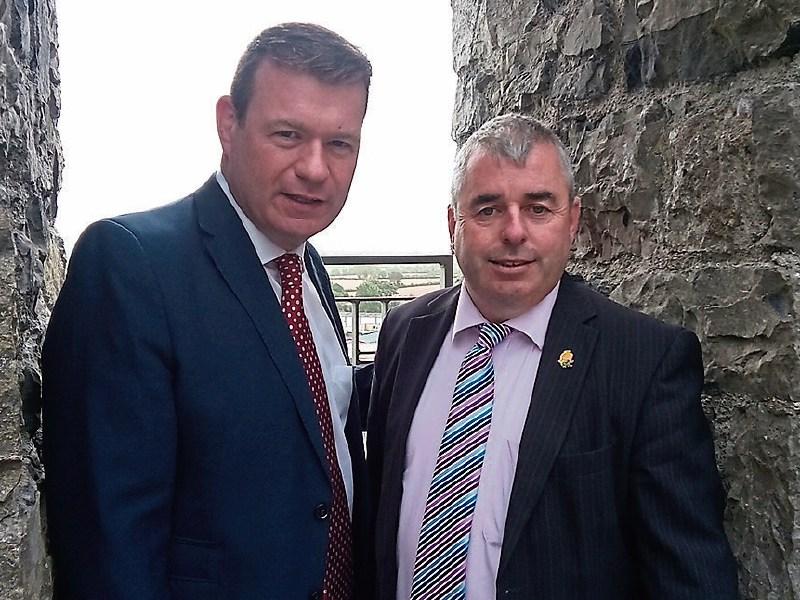 The Minister for the OPW, Kevin 'Boxer' Moran, with Deputy Alan Kelly in Nenagh Castle

Plans to re-ignite the stalled Phase 2 of the Nenagh Castle project received a boost with the visit of Minister for the OPW to the castle complex.

Minister Kevin “Boxer” Moran, was in town on the invitation of Cllr Hughie McGrath.

After the visit, Cllr McGrath said that Minister Moran said he will arrange a meeting with the OPW and Tipperary County Council in the coming weeks with the view of starting the process of a feasibility assessment to bring matters to the next stage.

Under the original plans for the castle, two buildings were to be demolished on Pearse Street, opening up a vista of the castle from MacDonagh Street and Dublin Road. It was also planned to build a walkway to the castle and install an interpreative centre.

Minister Moran noted that he was aware that water, causing dampness, was leaking into the castle.

“The situation is being monitored. There have been a number of attempts to fix the problem but a waterproof membrane (placed on the roof) may be a possible longterm solution,” he said.

The Minister thanked Cllr McGrath and Deputies Alan Kelly and Jackie Cahill, together with local councillors, for meeting him and for showing him the key historical sites of Nenagh.

“I have a very keen interest in heritage and I am always looking for new ways to ensure that the public have greater access to our sites,” said Minister Moran.

The OPW provides a limited interpretation at the castle, and Minister Moran said that, resources permitting, this could be expanded.

He also pointed out that the OPW has a working relationship with Tipperary County Council nad had facilitated a number of events in the castle grounds, including the People's Picnic and Castlefest. It is proposed to bring Santa to the castle this December.

Meanwhile, Deputy Alan Kelly said following the visit he had been in touch with Minister Moran and he was confident that the Minister will provide funding to commence the works that had been planned.

“I have been raising the issue of the funding required to carry out phase two works on Nenagh Castle with the Minister for Public Works for months now. Nenagh Castle looks fantastic and has had record numbers of visitors over the last year. We need to continue this and developing the original entrance to the castle, completing more renovation works and looking at an interpretive centre would really enhance the visitor experience of this fabulous attraction. I'm confident that Minister Moran will help us with this and that funding will be provided in the coming months'.

Tuipperary County Council said that Nenagh Castle was one of the key heritage attractions of Nenagh and the purpose of the invitation was to put the further development of Nenagh Castle on the agenda at national level and to start discussions with a view to securing agreement and funding for this.

The council is in the process of developing a medieval garden on a site adjacent to the castle known as Gill’s Garden. In total over €1m has been invested by Nenagh Town Council / Tipperary County Council in capital projects associated with the castle and its surroundings. In addition to this, the Council also fund the Tour Guide service which is provided in conjunction with the North Tipperary Genealogy & Heritage Service.