A Tipperary man who was in Las Vegas for a work conference has described the scenes of utter chaos after a gunman opened fire at a music festival in the city on Sunday night.

Martin Fogarty from Clogheen, Co. Tipperary was staying in the Mandalay Bay Hotel and was in the nearby MGM when a gunman opened fire killing 58 people and injuring more than 500.

Speaking to TheJournal.ie earlier today, Mr Fogarty described how he was returning to his hotel room at the Mandalay when his boss called him to say stay where he was.

“She said they were hearing what sounded like gunfire everywhere, ”he said.

Mr Fogarty, who lives and works in Austin, Texas, was attending a work conference in Las Vegas this weekend and was at the MGM hotel when the shooting broke out.

Just got back into my hotel room. The mood is so incredibly sad and somber! It’s really hard to take in the events of the last 10 hours

Mr Fogarty made his way to the Tropicana Hotel where people were ordered to move to a convention area.

“After a while people just started streaming in. They were running, they were crying. A couple of people had minor injuries,” he said.

Up to 22,000 people were attending the Route 91 Harvest festival when a gunman opened fire on the crowd from a 32nd-floor window for several minutes.

The gunman has since been named as 64 year old Stephen Paddock.

In a post to social media, Martin’s sister Caroline Fogarty said her brother was now on route back to Austin.

“Thank you to everyone for your messages & calls today about what happened in Vegas in the early hours. Martin is finally back in his hotel room in The Mandalay bay, his work conference is obviously cancelled so he's gathering his bags and will be Austin bound in a matter of hours (massive sigh of relief).

"Violence like this is sadly a part of daily life but to have a loved-one right there in the midst of it is incredibly frightening. Martin, surrounded by terror, fear, chaos and uncertainty this morning got himself together to be interviewed by TV & radio newscasters and was broadcast on national TV here at home, He did this with great calmness and professionalism that you'd think it was his job.

"I'm incredibly proud of Him for how well he did this. He's my Hero! His interview will air again on TV3 at 5.30. I'm not going to speak about the man who did this only to say I'm sure "the man below" will deal with him.

"Get your bags Brother bear and get the hell out of there!!!

"God bless all those who lost their lives, the injured and all the amazing first responders constantly facing down these dangers.” 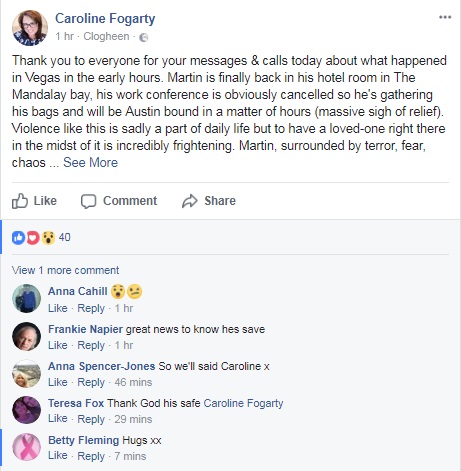