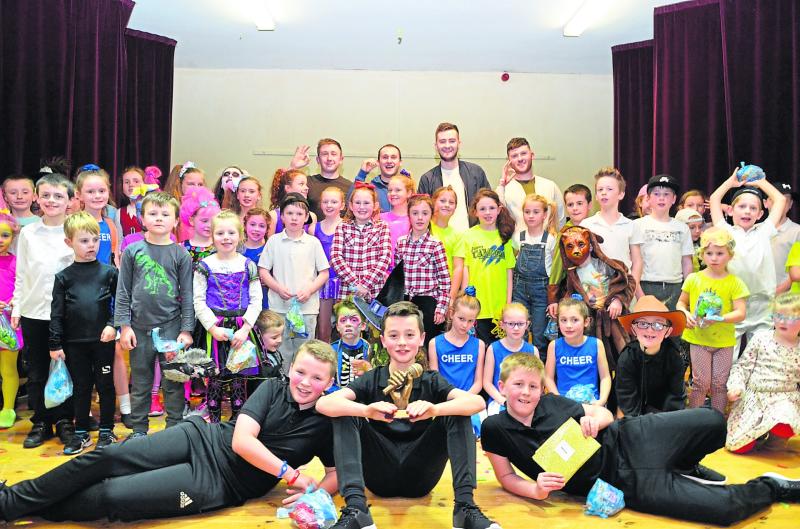 Gortnahoe Junior Lip Sync sets the bar high for the adult event that is taking place at the Dome on the 2nd December 2017.
What an amazing evening on the night of Friday 10th November as the children of Gortnahoe put on a spectacular, sold-out Junior Lip Sync Battle.

Twelve acts performed over the course of the show, organized by the Juvenile GAA, to raise money for Gortnahoe National School IT equipment and Gortnahoe AstroTurf. The event had the parish buzzing and the halls busy for the past few weeks as healthy competition drove many practice evenings across the parish.

Preparation started back in September for the teams to pick music, make costumes, and create new dance routines. It was great to see so many people involved in the competition, representing the entire parish, including a number of children from the parish who attend schools in Ballysloe, Cashel, Tullaroan, Templemore, Rathdowney, and Kilkenny. It was quite apparent that each of the teams, along with their managers, put in quite a lot of effort during the preparation to create such an amazing display of colour and talent. The children put in a huge amount of work themselves and really took control of their acts which helped to strengthen the bonds of friendship between them all.

The show was kicked off by some nice words from the Chairperson of the Gortnahoe/Glengoole Juvenile GAA Club, Jim Lanigan. Jacinta Purcell and PJ Gleeson acted as master of ceremonies for the night and kept everyone entertained and engaged throughout the entire show. They had a lovely way of putting the children at ease and helping them to enjoy the night. Ireland’s Fittest Family winner Ciara Cummins, Gortnahoe/Glengoole GAA star Ronan Teehan, and Mid Tipperary Games Development Administrator Andy Ryan brought glamour and style to the judging table for the evening. Their comments throughout the evening added fun to the event and delighted the children and the audience alike.

During the course of the show, children danced, jumped around, clapped hands, did handstands, cartwheels, the splits, drove taxis, and some even did the “funky chicken”. And of course all of the children on stage lip-synced their hearts out. While the judges deliberated on the winners, Jack Doheny and Eamonn Long each showed off their amazing musical talents by singing a song solo for the audience.

At the end of the evening, the judges called out the winners: Wrong Direction (managed by Joanne Long), Happy Ever After (managed by Sharon Ryan), and The Sassy Sisters (managed by Aishling Lawlor). However all of the parish were winners with the event raising over €2,300 to support the Juvenile GAA entry into the upcoming Lip Sync event. These funds will go to the Gortnahoe National School and the Gortnahoe Astroturf fund.

The night could not have gone off so well without the support of so many people who organised the event, published the program, made sandwiches, sold sweets, sold raffle tickets, set up chairs, did lights/sound and opened and closed the curtains during the show. A special thanks to all who dedicated so much of their time to make this such a professional, successful, fun, and memorable night for the entire community.

A sincere congratulations again to all of the 12 teams who participated, they were the driving force behind a truly wonderful night.

The children of the parish have set down the marker and blazed a trail for the adult’s event which takes place on the 2nd December.

The judges for the adult Lip Sync in The Dome Thurles are former Tipperary Hurler and Mullinahone man Eoin Kelly, fashion designer Heidi Higgins, Evelyn Cusack of Met Éireann and RTÉ and comedy duo The Two Johnnies. MC for the night is Alan Shortt actor and comedian former of satirical show Bull Island.

Tickets for the night are available from Gortnahoe National School (056) 8834390 and are selling fast.

Entertainment into the night with a disco after the winners are announced. It promises to be a fantastic night on 2nd December in the Dome.