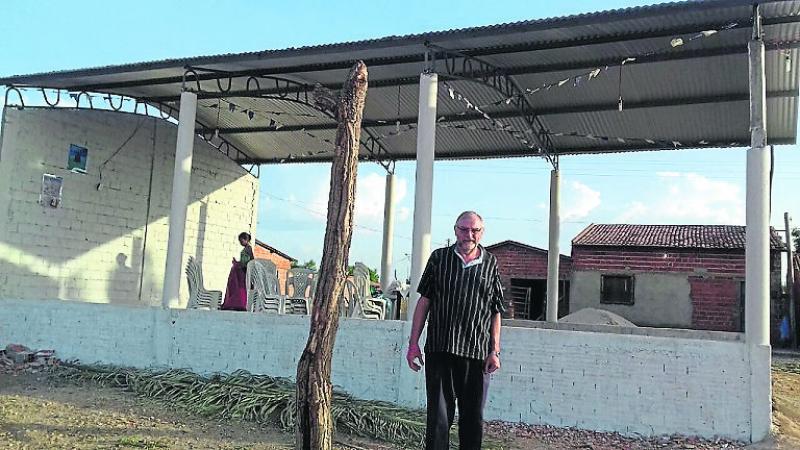 Fr Matt is pictured in the centre that they have started to build already in Brazil.

A Templederry born priest working on the missions in Brazil is making an appeal for funds to help him build small social centres to enhance the lives of people living in one of the most deprived areas of the country.

Redemptorist Priest, Fr Matt Ryan, who has been ministering in Brazil for 37 years, is currently back home on holiday in Cooleen, Templederry, but is now anxious to get back to his missionary and social work and continue with the building of social centres, one of which he and a fellow priest have already started building.

By western world standards, the social centres will be an extremely modest structure, the present one measuring only eight metres wide and 22 metres long. But Fr Matt says it will be a vital piece of infrastructure for many of the 25,000 inhabitants of a deprived parish in Teresine, the city with a population of one million people where he is now based.

He is being helped in his fundraising efforts in North Tipperary by fellow Templederry parishoner Marian Harrington who has raised funds for Fr Matt's work over the past number of years, for his work in Brazil.

As part of that effort, Rory O’Dwyer along with members of Fr. Matt’s family, friends and neighbours have come together to organise a Charity Tractor Run on Saturday, December 30th. The event will start from Bishop Quinlan Park in Borrisoleigh at 11.30am and take a route that encompasses Templederry, Silvermines, Rearcross and Upperchurch, before completion of the circular route back to Borrisoleigh.

"We would like as many people as possible to support our tractor run on the day, but we would very much welcome donations at any time," Marian told the Tipperary Star.

Special walks on New Year's Day, Monday 1st January, are being organised by Helen Slattery with the able assistance of Christy Kinane and Tom Leahy, to also help raise funds. The walks will begin at 11 o'clock from The Kenyon Connunity Centre, Templederry and will take in 3 routes as follows: 3.5k of road walk, 6k of road walk and a 10k of road and forest track. Refreshments afterwards. For further details of walks contact Helen Slattery 0876748147, Christy Kinane 0876198362 or Tom Leahy 0504 52885 Everyone who takes part in this walk will be entered in a Free Draw for numerous prizes including a trailer of timber.

Marian pointed out that every Euro collected for Fr Matt's work goes directly to him to be used to enhance the lives of the people in the parish where he works.

Redemptorists like Fr Matt have been ministering in Brazil since 1963, but he says the kind of work the priests do has changed dramatically from purely missionary work to helping to bring about a more just society in a country where a relatively small core of wealthy people co-exist with a population that is overwhelmingly poor.

"We face big challenges in improving the education and health systems and building these social centres in this parish will go some way to helping the poor in an area where violence and drug abuse are major problems and where people are living on top of each other because the population is so dense," said Fr Matt.

He added: "We could have decided to build a churches, but instead we opted for social centres that could be used every day of the week to help deprived children and adults to get an education and a place where people can just come and meet and have community meetings. We can also celebrate Mass in these centres at weekends.

Fr. Matt is also very grateful to the Templederry Killeen branch of the Apostolic Workers under the leadership of Mary Ryan, Cooneen. Through their special efforts and hard work have been a great support to him over the years.

TippFm were in Marian's home on Monday 11th December to record a “Down Your Way” programme about Fr Matt and the fundraising which is going on in the parish for him. This programme will be aired on Saturday morning 16th December from 10am to 11am.