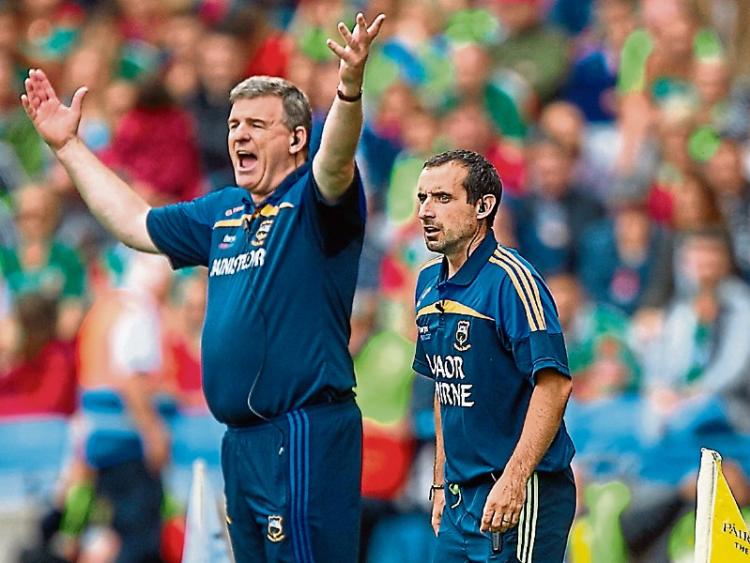 Tipperary football Shane Stapleton (right) who was taken to hospital after being injured in a collision on the sideline in yesterday's Tipp v Clare game in Ennis.

There is a great sense of relief around Tipperary this morning to hear that Tipperary senior football selector Shane Stapleton is on the mend after collapsing at the Tipp v Clare National Football League Division 2 game at Ennis yesterday.

The Golden/Kilfeacle man was manning the sideline for Tipperary when Clare forward Jamie Malone collided with him when chasing a sideline ball. Stapleton fell hard to the ground but was up again in a flash, only for to collapse unconscious on the sideline again a few minutes later.

Malone was red carded after the linesman gave his opinion on the incident to referee Jerome Henry. And in the follow-up to that dismissal Clare lost a second player when corner forward David Tubridy was black-carded for arguing with the referee’s decision.

After collapsing unconscious to the ground directly in front of the main stand, Stapleton was attended to by medics from both Clare and Tippeary camps. He was removed on a stretcher from the sideline to a room under the stand and soon after the game removed to the Mid Western Hospital in Limerick.

According to Tipperary County Board PRO, Joe Bracken, “Shane was ok and kept in overnight for observation," while "still groggy and a bit shook from the incident”.

Fellow selector, Paul Fitzgerald, was delighted to say that all the tests on Shane are clear however he was still very tired and groggy understandably. "They will make a decision later to discharge him or not, but all looks ok as of now, thank God," added the Fethard man.

It is hopeful that Shane will make a full recovery and will be back to his teaching job and helping out Liam Kearns and the rest of the Tipperary team for the remainder of the Division 2 campaign.

County Football Board chairman, Barry O’Brien, described it as an “unfortunate incident” and saw “no intent” in anything that the Clare player had done. “Shane's health at this stage is more important than any game,” added Barry.

All in Tipperary, especially the footballing fraternity, join in wish the very popular Shane a speedy recovery to full health.