Tipperary roads: TII has 'no issue' with M7 surface despite high number of accidents 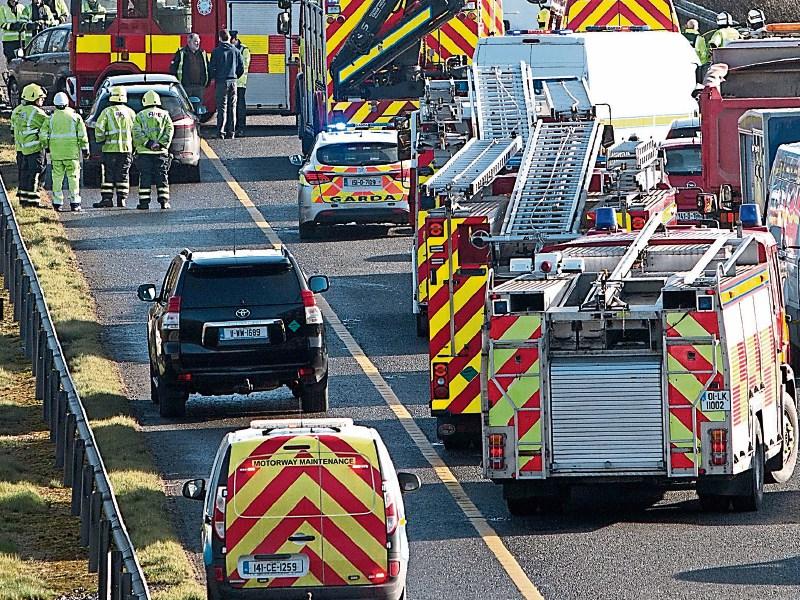 Emergency services attend a crash on the M7

Following a spate of deaths and injuries on the M7 over the past while in bad weather, motorists will need to be careful over the coming days with treacherous weather promised.

The issue was raised at the February meeting of Nenagh Municipal District Council following a meeting between Tipperary County Council and Transport Infrastructure Ireland (TII).

Nenagh MDC Cathaoirleach Cllr John Carroll said the TII had agreed the number of accidents was an issue.

“Because of the number of accidents on the M7 and M8, the TII has looked at the road surface but don't think it is an issue,” district manager Marcus O'Connor told councillors.

He said the issue seemed to relate to hailstones with localised storms that were short and intense.

“Driving on hailstones can be lethal,” he said. It is like driving on ball bearings.”

The TII had spoken to Met Eireann about the issue, he said.

Mr O'Connor said that the the weather conditions were “not treatable or predictable”.

“You get a dirty, black cloud and then hailstones,” he said. “Salt doesn't work.”

He revealed that the TII felt there was a problem with driver behavious under such extreme conditions.

He was backed by Cllr Carroll who said that there was a greater level of safety if people slowed during bad conditions.

“People think that because they are on a motorway, it is salted and it is safe,” he said.

He also revealed that he had come across drivers texting and drinking coffee while driving. In another incident, he had observed a woman passing in a car in which a child was jumping up and down on the seat.

“Driver behaviour can be appalling,” he said.

“There are no traffic police on the M7,” he stated.

Earlier, Cllr Joe Hannigan had said that the problem was such that motorists could be told to avoid the M7 from Roscrea to Birdhill when weather is extreme.

Cllr Hughie MacGrath warned of the dangers of aquaplaning, especially at Junction 29.

“If there is a wind from the bog it appears to hold water back on the carriageway. I don't think it would as much a problem if there was screening on the road,” he said.

Meanwhile, Cllr McGrath thanked TII for replacing timber fencing along the M7 following reports that it had added to injuries and deaths in accidents.

He called for more gantries over the carriageways giving information about road and weather conditions in the area.

Mr O'Connor said that there were plans for more information gantries on the road network.