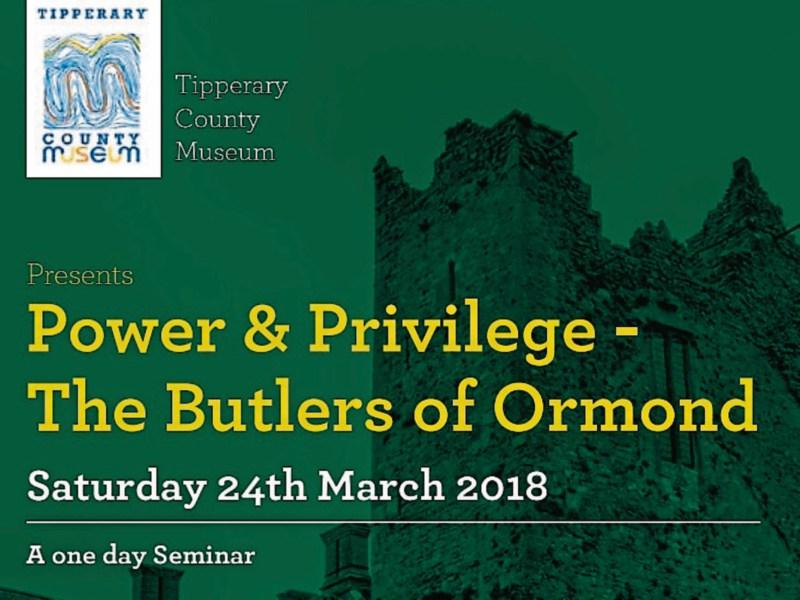 Tipperary County Museum is to present a one-day seminar entitled 'Power & Privilege - The Butlers of Ormond, on Saturday, March 24th next.

Noblemen, Chief Butlers to the King, property and titles – from the arrival of Theobald Fitzwalter with Prince John in the 12th Century to the heights of Earls and Dukes, the Butlers of Ormond gained power and influence with almost every generation. Their legacy has given us some of our greatest national monuments, and personalities such as Elizabeth Poyntz Lady Thurles, and the First Earl. This seminar aims to shine a spotlight on some of these stories and to look at the legacy of the family

This event will take place in Damer House, Roscrea. Admission €5. Booking is required with payment in advance. Contact julia.walsh@tipperaryco.ie, or 07 61 06 5254.

The introductory lecture will be delivered by David Edwards, Senior Lecturer in the Department of History in University College, Cork. His research interests include developments in 16th and early 17th century Ireland from a variety of local and regional perspectives. His 2003 study of The Ormond Lordship in Co Kilkenny 1515 – 1642 drew on the enormous Ormond archive in the National Library of Ireland and the Bodleian Library and explored the fortunes of the family and its subjects through both the Tudor and early Stuart colonisation and Protestantisation of the country. He has published widely. Drawing on his research of the family for his book 'The Rise and Fall of Butler Feudal Power', he will discuss key issues concerning the fortunes of the Butler dynasty.

Guest speaker Dr Jane Fenlon has lectured in TCD, UCD, UCC and published extensively on Irish Art and Architecture of the 16th and 17th centuries. Dr Fenlon will speak on Elizabeth Poyntz Lady Thurles, ‘a Lady of Wit and Spirit’. Elizabeth (sometimes Helen), Lady Thurles was the daughter of Sir John Poyntz of Iron Acton, Gloucestershire, and married Thomas Butler, Viscount Thurles, before 1610. By this marriage she had four daughters and three sons. She was widowed in 1619. A year later she married again, to Captain George Mathew of Radyr, Llanda and Thurles. He died in 1636. She lived on through the difficult times of the 1640s and 50s when her estate of 4,000 acres in Tipperary, including Thurles Castle was sequestered and she narrowly escaped being transplanted to Connaught. Her lands were restored to her following the restoration of Charles II and the creation of the Dukedom of Ormond for her eldest son James Butler (1610-88).

Guest speaker Regina Sexton is a food historian, food writer, broadcaster and cook. She has been researching and publishing in the area of Irish food andculinary history since 1993. Her research interests include food and identity, food and tradition and food and the Irish country house. She has published widely at academic and popular levels. Her publications include 'A Little History of Irish Food' (Gill & Macmillan, 1998) and 'Ireland’s Traditional Foods' (Teagasc, 1997). Ms Sexton will explore 'The Food and Culinary Cultures of Powerful and Privileged Families in Later Medieval Ireland.'