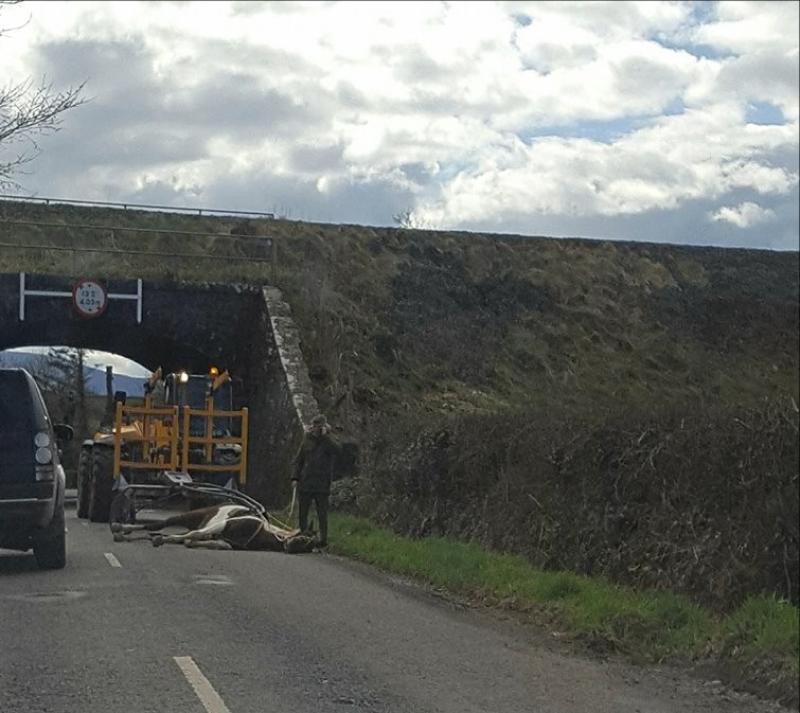 A horse lies on the roadway

There is outrage in Clonmel today as photos emerged of another dead horse in the area.

The photo above was taken on Wednesday afternoon on the road between Barne and Knocklofty, a few miles west of the town, and circulated on social media.

It appears the horse collapsed in the middle of the roadway and the sulky it was pulling was removed and the owner left the scene.

Just one week after the new local group Action for Animal Welfare Ireland took to the streets to call for the end of horses’ misery, march organiser Anne Williamson described the horse’s death as “heartbreaking.”

More than 250 people gathered in Clonmel, last Thursday, and delivered letters to the county council calling for a dedicated horse warden in Tipperary.

“I’m completely disillusioned,” Mrs Williamson told The Nationalist, just days after so many people “came out and tried to do something”.

A horse warden would be a step in the right direction, she said, there needs to be a dedicated authority.

“That poor, misfortunate animal was raced into the ground. The owner took the sulky off and walked away.”

Mrs Williamson said she “forever” emailing the Minister for Agriculture, his department and TDs to do something about the care of horses in Tipperary but she is “not even getting answers.” Now, she says, the issue may have to be dealt with in Europe if the Irish government won’t address it.

Action for Animal Welfare Ireland are planning another protest in the autumn.

Online reaction to this latest horse death has seen members of the settled and Traveller communities clash.

Commenters have said: “This is awful it makes me sick,” “It makes my blood boil,” and “Gone beyond a joke.”

However in response another commenter said: ‘Ye know nothing about Travellers tbh a horse could  die over anything and still the Travellers get the blame, ‘Horses were on the road way before any fancy car. How can you blame the people for it probably the horse just lied down over anything.’

UPDATE FRIDAY, APRIL 6: Yet another dead horse discovered in the Clonmel area - second this week!