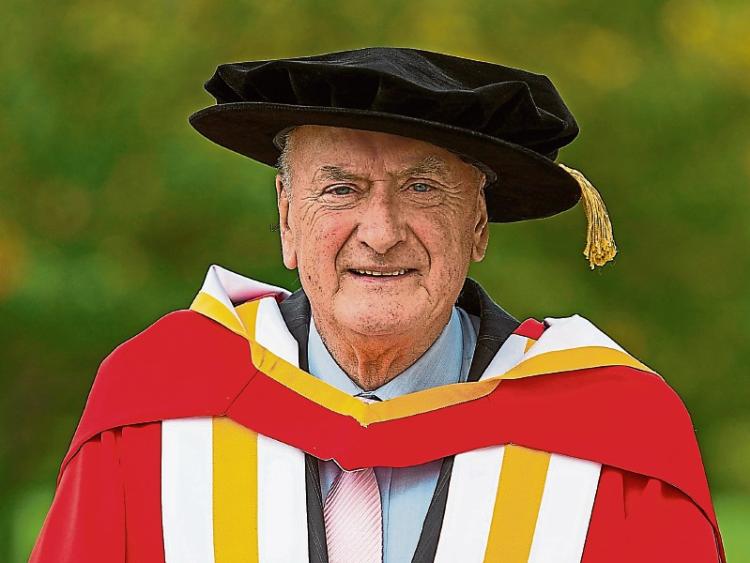 Roscrea Author and Historian Dr George Cunningham has been honoured with the Conferring of a Life membership of the Offaly Historical and Archaeological Society.

George is a former primary school principal (Coolderry Central School, Birr) and a community activist at many levels, not least the promotion of an awareness of heritage and the environment.

At the conferring ceremony in Tullamore on March 26, the Society said: “We in our small way in Offaly wish to honour George with this conferring of honorary life membership in the Offaly Historical and Archaeological Society.

George was a guide and mentor from the 1970s. He has taken a keen interest in south Offaly as is evident from his published thesis on the Normans as already mentioned. He provided practical help in so many ways to our society in its early years and had we emulated him we would be so much further advanced in local studies in the county. In that which we have achieved his work was always to the forefront in our ambitions.

“We wish George, his wife Carmel and all his family our best intentions in the coming years and we hope that now that the conferences have come to an end that they may enjoy the rest and calm they both so richly deserve.”

Born in Roscrea in 1940, George Cunningham was awarded a secondary scholarship to St Flannan’s College in Ennis, Co. Clare. After graduating from St Patrick’s College, Drumcondra as a primary school teacher in 1961, he was appointed principal of Coolderry National School in Co. Offaly. George’s teaching deepened his interest in his home place. He soon became a community advocate and championed Roscrea’s built heritage, environment and tourism potential.

He has been involved with promoting the southern tip of Offaly since his first guided tour to Ely O’Carroll territory in 1973, and was part of the first voluntary archaeological survey of Offaly in the late 1970s and early 1980s.

He was the founder, publisher and editor of Roscrea People, from 1974 to date. From 1977, for over 20 years, he and John Feehan ran the annual Roscrea Summer School of Local Study, which gave teachers valuable insights into the local environment. In 1980, he organised genealogical, architectural, archaeological, environmental and folklore surveys of Roscrea and its environs. He co-founded the Old Roscrea Society and in 1980 the Roscrea Heritage Society, of which he is the life president. Throughout all his endeavours, he has had the dedicated support of his wife, Carmel, and their family.

Now a national director of Crann, he has revived its South West Midlands branch, incorporating it into Roscrea’s Tidy Towns. He has taught and lectured at all levels and gave seventeen years public service to the Governing Authority, many years as Deputy Chair, of the University of Limerick and chairman of its library development committee. He was also chairman of the Bolton Library Board, from 1994 to 2010.

George directed the Roscrea Conference from 1987 to 2017; the Spring conference in April 2017 was the 60th consecutive gathering at the Cistercian Abbey, Roscrea. The conferences – 60 conferences from 1987 to 2017 - gave rise to three publications, the second of which, A Carnival of Learning, was a festschrift of essays edited by Peter Harbison and Valerie Hall to honour George’s work. 60 at Roscrea a commemorative volume celebrating the 60 conferences is George’s latest book. At present he is directing a major heritage project on the Heritage of the Dovea Estate, Thurles…From Landlords to Genetics. This will be published towards the end of 2018.

A major book project has been ongoing since 1987; to date over 65,000 books have been donated to schools, colleges, and charitable institutions.

A major pioneering heritage/historical project is in hand with Coláiste Phobal Ros Cré consisting of an initial donation of 3,500 books by Carmel and himself from their personal library. Recently he has donated his local archives to the relevant Public Library Services of Offaly, Tipperary and Laois. Offaly County Council hopes to have its donation catalogued by the end of this month.

George Cunningham’s most enduring physical legacy in his native county is the preservation of Damer House, a Queen Anne townhouse built within Roscrea Castle in 1720.

His research on the south-west midlands of Ireland earned him an M.Litt. (Master of Letters) from Trinity College Dublin in 1985; his thesis, entitled The Anglo-Norman Advance into the South-West Midlands of Ireland, 1185–1221, was published in 1987.

George’s lifelong interest in the round tower culminated in 2014 with the publication of the much-acclaimed book The Round Tower at Roscrea and Its Environs. George continues to campaign for improving the environmental setting of the round tower and the adjacent Romanesque west gable of St Cronin’s Church.

George Cunningham’s contributions to heritage, conservation and education have already been recognised in his election in 2008 as a Fellow of the Society of Antiquaries – a rare honour for an Irishman – and in the award in 2012 of an honorary Master of Arts by the National University of Ireland, Galway.

For his outstanding career of scholarship, heritage preservation and community activism and for his invaluable contribution to the University of Limerick, UL has honoured George’s lifelong achievements with the honorary degree of Doctor of Letters.