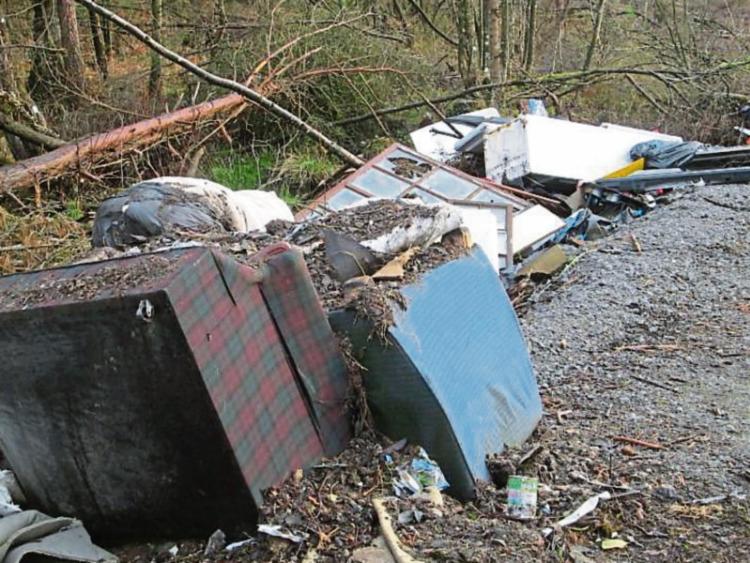 Dumping such as this on the side of a road in Co. Tipperary, causing anger for residents

Littering and dumping around Tipperary and Cashel is now an embarrassment so bad that the country should feel ashamed when tourists come to visit, heard the May meeting of Cashel Tipperary Municipal District.

Cllr Roger Kennedy thanked all for the recent Spring Clean but said a lot of good work has been undone by the amount of litter thrown out of cars. “I don’t know what can be done to combat that.”

Cllr Mary Hanna Hourigan said there was so much dumping around her area of Cappawhite that a local homeowner has had to put up cameras on his house. “It’s gone completely out of control.” Cllr Hourigan inquired as to whether a member of the public should search a rubbish bag if they find one, or contact a public official. She had seen three large plastic bags left outside a recycling bin. “The only way we can tackle this is door to door spot checks,” said Cllr Hourigan. “It’s the only way.”

Cllr Tom Wood said the rubbish was very obvious during the winter as hedgerows were barren, but “there doesn’t seem to be any end to it.” There was a scheme to go house to house, but a lot of the rubbish is left by people coming in from other areas. “It’s gone from bad to worse. Individuals do such wonderful work and this just defeats the whole purpose. I would like to see that (door to door) scheme introduced.” No. 9 Treacy Villas in Cashel is still derelict, and has “deteriorated even further.” A notice on the property was erected “7 months ago” but nothing has been done to improve it. “It has worsened. I would like if it was cleaned up. Residents would appreciate it.”

Cllr Martin Browne said they don’t have the staff to knock on every door, and some families share bins. Cllr Browne suggested a trial period of six months, where some residents could dispose of their rubbish in “industrial bins” which are used elsewhere in Europe. “A small fortune has been taken up with this issue. We need to start doing something different. Year after year, we are doing the same thing, again and again.”

Cllr Denis Leahy said he would support the idea of a communal bin in some estates, on a trial basis. Some people cannot afford any bins, since a waiver scheme was discontinued. “People either don’t have a bin or won’t pay. But there are people who cannot pay.” When the waiver scheme was in place, “there was not so much dumping then. If it wasn’t for the Tidy Towns, there would be an epidemic,” he said.

Cllr Wood said there are some people who wouldn’t use a bin “even if the bin was outside their own gate.” He recalled a journey made from Cork on the motorway to Tipperary with visitors, and “it was an embarrassment. I was glad the visitors fell asleep in the car given the amount of cans, and plastic bags thrown on the side of the road. Some people are literally dirty.”

Cllr Roger Kennedy said it’s a “blight on our country.” He recently received a call from an Auctioneer in Tipperary town regarding a property that was to be sold. After having the property cleaned, the Auctioneer noticed that the area around the house was full with rubbish that had been dumped there. “It’s shocking, at what had been dumped. There was a viewing arranged, but it had to be cancelled. It’s a shame on our country that this is happening.”

A Council Environment official said they are targeting young people in an education campaign. “It’s bottles of coke, burger boxes, thrown out of cars. We’re trying to reduce that.” Only authorised officers should search dangerous material in rubbish bags, and new bylaws across the region will give powers to Co. County officials to prosecute householders if they cannot provide evidence that they are legally disposing of their rubbish.

There are five recycling centres across the County and the Council will “encourage” people who have no bins to use them. Installing “industrial bins” would have to be a “national” decision, she said.

Cllr Browne also suggested imposing a system where drivers’ car licence plates would be printed on certain fast food bags - a system already in place in parts of America. This could be used to identify culprits. An Environment official said this may conflict with data protection laws.

Cllr Leahy added that some people on social welfare, are either incinerating or dumping in their own backyards. “The ability to pay has to be addressed. Bin charges are gone more expensive.”

Some 66% of people in Tipperary have a bin service, and we “will raise the issue of non ability to pay,” responded the official.