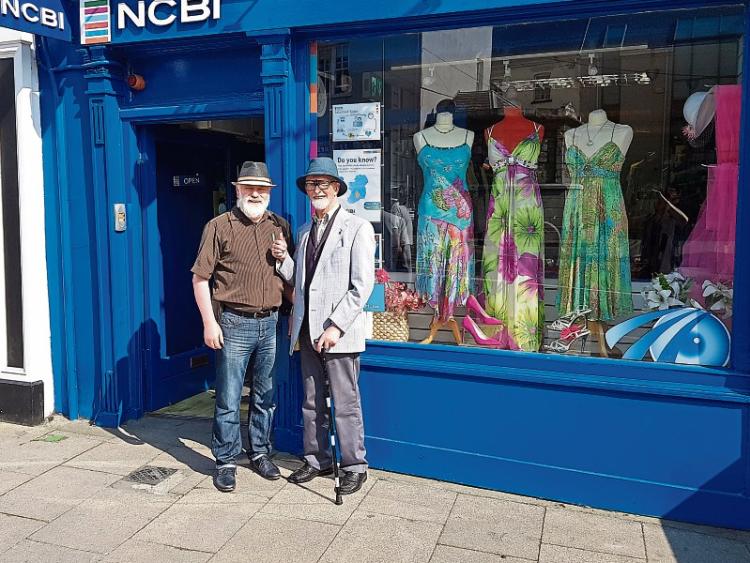 Matt Murphy and Michael O’Sullivan, the friends who married for tax reasons, made a return trip to Matt’s ancestral home in Co. Tipperary this week, refreshing old acquaintances.

The two friends, who are heterosexual, made headlines last year when they availed of Ireland’s new equal marriage laws to lawfully avoid paying inheritance taxes.

Mr O’Sullivan (58), who has three adult children, and Mr Murphy (85), have been friends for over 30 years, and Mr O’Sullivan is now Mr Murphy’s carer. They had originally planned to get married in Cashel, Matt’s hometown, but the humanist solemniser was unsure about the legality of the wedding at the time, and withdrew. The two men ‘tied the knot’ in Sir Patrick Dun’s Hospital in Dublin at a registry office, accompanied by the registrar, a harpist and two witnesses.

Matt hails from Ballinure, near Killenaule, and he bought his mother a small house in Agar’s Lane, near the Church of Ireland in Cashel, about 30 years ago. Matt returned to Cashel last week to see the property and renew old friendships.

Michael says Matt used to come down to Cashel on a regular basis but hasn’t been well enough to visit in a while. “We’re going to go home on Saturday,” Michael told the Tipperary Star.

Matt was involved in the local NCBI (National Council for the Blind of Ireland) through his association with the family that owned the Noan estate, in Ballinure. That family established the NCBI and its sister organisation in England. Matt also knew the Quinns from Bansha, who started one of first charity shops in Cashel, known as Mrs Quinn’s Charity Shop. While Matt came to stay with his mother in Cashel from Dublin he would help the Quinns on trips up and down to the capital. “We actually have a photograph of Mrs Quinn, and Matt wants to have a picture of her in every NCBI shop. She was an original founder,” says Michael. Matt grew up in the one of the Lodges in Ballinure, and always remembers his roots in the area of Noan Estate. “He was born in one of the Lodges.” Matt’s mother came to feel isolated in the estate in her later years, so he bought her the Agar’s Lane house, where she spent the last six years of her life.

“She loved being in the town, because she was a very gregarious person. She was like Matt himself,” says Michael.

The Murphy family story is due to be adapted for the big screen soon as a British film production company is writing a script based on their experiences.