'Something about water' in Damer House Gallery, Roscrea 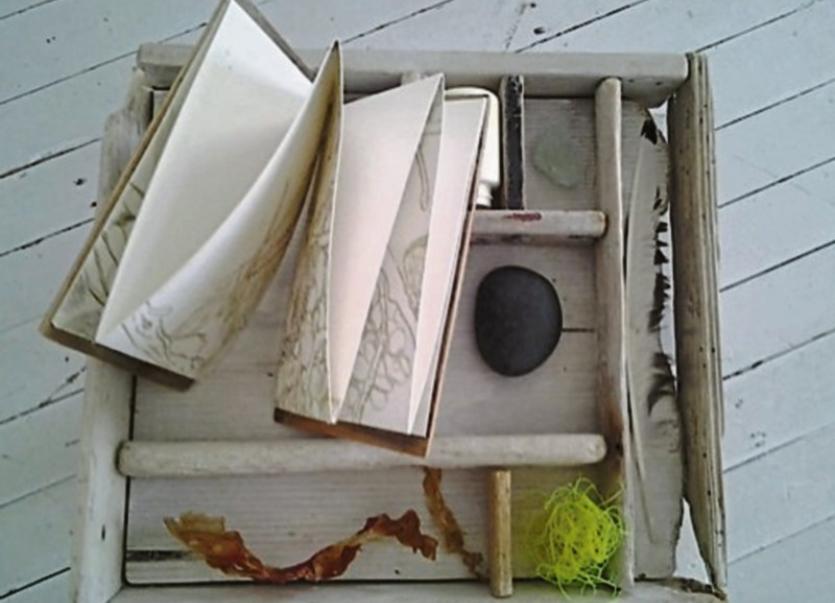 The exhibition currently on view in Damer House Gallery, Roscrea, Something about Water is the work of three Tipperary based artists, Verona Stellet, Donal Sheehan and Carol Kennedy.

Water is the source of life and is essential for living. All three artists draw their inspiration for this exhibition from water and its environs and all explore the subject in different ways in terms of concept and practice.

Carol Kennedy, who also curated the exhibition, grew up close to a river and has always been drawn to water. Using various media, (drypoint, monoprint, digital photography), her work focuses on memory – the memory of moments that she experienced and passed away all too quickly. As she says “Life is fast moving and the chaos of today’s world reminds me that nothing stays the same and all we have are our memories” Water is constantly moving, constantly changing, and constantly reflecting the environment around and above it.

Her work has an ephemeral quality, fleeting moments captured forever. While the moment she experienced is captured in time, we get the impression of gentle movement, as in the images of jellyfish and the ever changing colours and ebb and flow of water, continuously moving like life itself. She manages to capture both the essence and the reality of the memory while reminding the viewer of the cleansing, refreshing and healing power of water.

Donal Sheehan uses a variety of media to express his thoughts on and in water. He is looking at water, he says as the “element of beginning and centre of everything”. I n 2015, he decided to study water, literally to immerse himself in it.

He chose the Shannon River as his teacher. He swam in its source pool and spent the summers of 2015 to 2017 walking and swimming all the 365km of the river. During this time, he wrote, photographed and filmed his journey, creating a body of research that he is now he says only beginning to piece together. The short film on view in this exhibition is as Sheehan describes it, a “fragmentary beginning of the story” Even without knowing the context of the film, it is a beautiful and self-contained meditation on water.

The ever changing sky is mirrored in the water below, the gently moving reeds, the light reflected as movement. The viewer is also aware of a journey, the journey of the artist’s exploration and of us who join him on this journey as we watch the film.

Occasionally a ship’s bell rings, reminding us of time and perhaps of beginnings and endings.

Sheehan’s Water Poem can also be described as a meditation on water. It is written in the style of a ‘Concrete’ or ‘Shape poem’ – where the visual appearance matches the topic of the poem.

The words and lines form shapes which illustrate the poem's subject as a picture, as well as through their literal meaning. In this poem we are looking at a flowing rhythm, reminiscent of waves. The words used are connected to, or in some way associated with both the feeling and emotion which water evokes as well as the reality of water.

Opposite this work is a rubbing of a tetrapod track way, discovered on Valenta Island in 1993. The track way was formed some 365 billion years ago, when Ireland was still part of the southern hemisphere continent of Euramerica. Tetrapod footprints are the oldest evidence of four-legged vertebrates walking on land.

As we evolved into mammals and ultimately humans, we all came originally from water. In a very real sense, water is the essence of life and this is a powerful reminder of that.

Verona Stellet work is concerned with the impact of the throwaway society upon the world’s oceans. This increasing problem of discard and waste (in particular plastic can be witnessed all over the world. It is becoming a serious and dangerous health problem for marine and human life.

Plastic bottles, it is estimated take up to 450 years, to decompose and fishing line, 600 years. In reality, no one really knows how long plastics will remain in the ocean. With exposure to UV rays and the ocean environment, plastic breaks down into smaller and smaller fragments. Stellet’s work explores this theme of marine pollution, and the concept of the oceans and shores as both human and natural environments. Using natural and marine debris which she collects, the artist creates images that are at once beautiful but which also confront the viewer with a sense of uncertainty and disturbance. As she says the “detritus attains an aesthetic quality, thus creating an ambivalent confrontation between the beautiful and the repellent” Tidal Treasures is the embodiment of this, where we see found objects, and the artists book in a case created from driftwood.

The found objects include sea glass, a stone, a gull feather, seaweed, fishing line and a small plastic medicine container. It is a poignant reminder of the responsibility we all have to ensure the health of our oceans. Ultimately it is humans who cause pollution which impacts not just on us, but on all life on the planet and that the health of the life source from where we came – water - is being destroyed by us.

The exhibition was opened by the poet and author Sean O’ Connor who noted that the theme of the exhibition is a timely one, given the heat wave that much of the Europe is experiencing, with consequent water shortages, while flooding in Japan killed 200 people in recent weeks. Water is essential for life, but it can also take it away.

Something about Water, in Damer House Gallery, Roscrea is open to the public from 10am – 4pm each day until August 5th. Admission is free