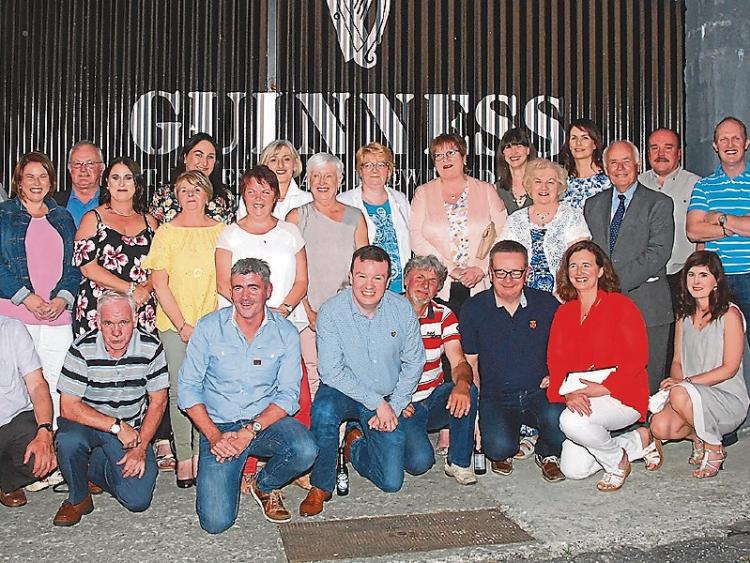 A most memorable night for all associated with Roscrea Credit Union took place recently.

The gathering of directors, volunteers, staff, past officers and well-wishers was in honour of three staff members that in 2018 celebrate twenty-five years’ service to the credit union.

The occasion was also used to thank former Director Liam Phelan for his many years of loyal service and his wife Mai who served as a volunteer and was always on hand to give help when required.

Gemma Loughnane who retired from the Board Oversight Committee last February was also given a presentation in recognition of her service on that committee during a very challenging period for the credit union.

Sean then welcomed back former Manager Brian King and asked him together with Ena MacMahon the current Acting Manager to help make the presentations.

Ena MacMahon thanked the staff in particular for all their efforts over the years. Ena remarked how she had enjoyed working with them all and she wished each and every one of them continued success with Roscrea Credit Union.

Ena also congratulated Liam, Mai, and Gemma and commented on the importance of their service over the years.

Brian King said it was an honour and a lovely gesture to be asked back to play a role in the presentation ceremony. Brian thanked Sean for his kindness and then he paid tribute to the staff who he said had seen a lot of changes over the last twenty-five years.

Brian said that during his management the credit union went through extraordinary change which was required and which needed the support of all the staff.

Brian thanked all the staff as he did at the recent AGM for their backing and acknowledged Marie, Mary and Deirdre in particular on their achievements.

Brian also acknowledged Liam and Mai and Gemma and reminded everyone of the importance that volunteers play in the management and success of well governed and successful credit unions.

In conclusion, Brian acknowledged Patsy Treacy who was present on the evening.

Patsy could not, unfortunately, attend the recent Credit Union AGM owing to the death of his mother Nancy and his father Ned who was one of the founders of the credit union.

Brian reminded us all that Patsy found himself in the unenviable position as Chairman in 2010 and like all the staff and his fellow directors deserves great credit for the courage and determination that was needed in the intervening years.

Brian said this determination is one of many reasons why so many credit union people and their supporters are able to gather on one of the warmest night’s of the year, eight years on, in 2018 to celebrate with each other and reflect on all that has been achieved in recent years.