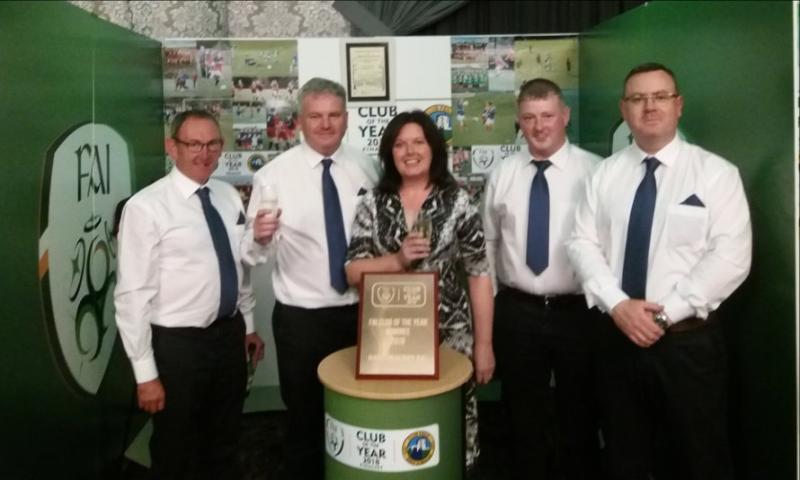 Ballymackey FC has taken the top spot in this year's Club-of-the-Year awards with the North Tipperary outfit being honoured at the FAI agm in Cork.

The club has come from humble beginnings back in 1973 to where it now caters for over 30 teams at various levels and has around 400 players.

Ballymackey beat off 2,600 other clubs around Ireland to take the award.

“For a place like Ballymackey in a rural area to be picked is a huge honour,” club chairperson George Haverty told the Tipperary Star.

As well as the honour, the club picked up a bursary for €5,000 which will go towards upgrading coaching standards that will filter down through the teams.

“The long term benefits will be in our ethos and in developing skills,” he said.

Ballymackey draws its players from parishes in the area, including, Toomevara, Templederry, parts of Nenagh, Cloughjordan / Kilruane and Silvermines, and can tap into 14 national schools when it comes to promoting the game.

George said the club tried to get kids in when they were young to give them a feel for sport.

“We are not about winning at all costs,” he said.

While he acknowledged that the club will always lose players, he said that if players get the chance of a trial with Limerick or Waterford the club didn't hold them back.

A lot of people wouldn't know that Barry Coffey, who plays for Glasgow Celtic, started with Ballymackey before joining Nenagh.

“We are proud to have started him off,” said George.

The club chairperson said they had to make four or five points in their presentation to the judges at the FAI agm in Cork, but reckoned they had won the award because of how they had developed from where they had started.

“The feedback from the judges was that we had taken small steps along the way, but they had all been forward steps,” he said.

Another item that impressed the judges was the fact that the club is equally split between boys and girls, with 140 girls playing for them

“I don't think any other club has that,” said George. “We don't look on them as boys or girls. They are all just players and they all get the same good slots for training.”

Community and volunterism was also a winning point.

“We give back to the community because it is the community that supports us. We also fundraise for organisations that are community-based such as the Irish Heart Foundation,” said George.

The important thing about winning the award, he said, was “not to get carried away. We know we have things to improve on.”

Apart from training, the focus will be on not losing the club's ethos and to cement where they are in the community.

Ballymackey is also aiming to achieve the FAI Q mark for standards and quality.

However, he was anxious to thank all the coaches who, week in, week out, go out and do their jobs.

“I would also like to pay tribute and say thanks to those people who kept the club going down the years,” said George.

He also had a word of praise for FAI chief executive John Delaney for the work he does at grassroots, as well as Denis O'Brien for his involvement in soccer.

“The spirit and generosity of these people is extraordinary,” he said, revealing that Ireland manager Martin O'Neil had congratulated them and thanked them for the work they were doing for soccer in their local community.