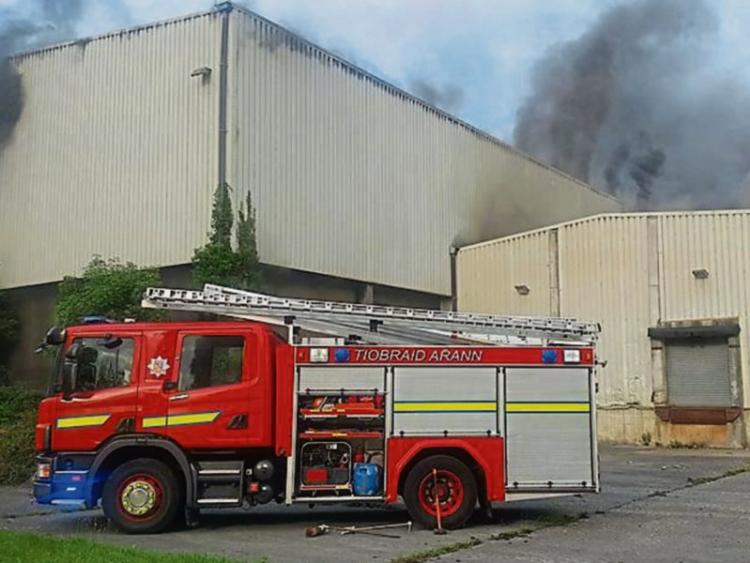 A fire tender at the scene of the fire at the former Clonmel Foods site in Clonmel, Picture is from Tipperary Fire Service Facebook page.

Gardai believe the cause of the major fire at the former Clonmel Foods meat factory complex on Sunday was suspicious and have appealed to anyone who saw any unusual activity around the site that evening to contact them.

Fire fighters battled into the early hours of Monday morning to put the fire at the disused meat factory at Upper Irishtown under control and a Garda investigation into its cause is now underway.

Extensive damage was caused to a large building at the complex and Tipperary Fire Service personnel only left the site at 9am on Monday after spending a long night dampening down the smouldering structure and monitoring the situation.

Clonmel Fire Service Rostered Senior Officer Tadhg O'Driscoll said the Fire Service handed over the site to the property's owners at 9am on Monday and the owners were now working to secure the area.

The Emergency Services were alerted to the fire around 6pm on Sunday.

Five fire tenders from Clonmel, Cahir and Carrick-on-Suir along with an hydraulic lift based at Clonmel Fire Station attended the blaze, which billowed large plumes of black smoke that blanketed the surrounding area.

Two fire tenders from Cahir and one from Carrick-on-Suir departed the site at 1am as the fire had been put sufficently under control at that stage. Fire fighters from Clonmel remained there dampening down and monitoring the site until the morning.

There were road closures in the area around the factory until early on Monday morning due to the fire and heavy smoke.

Mr O'Driscoll said the excellent work carried out by fire crews minimised the damage and stopped it from spreading to the entire complex. He confirmed there was no asbestos in the building that went on fire.

A Garda spokesperson appealed to anyone with information that may assist their investigation into the fire to contact Clonmel Garda Station at (052) 6122222.