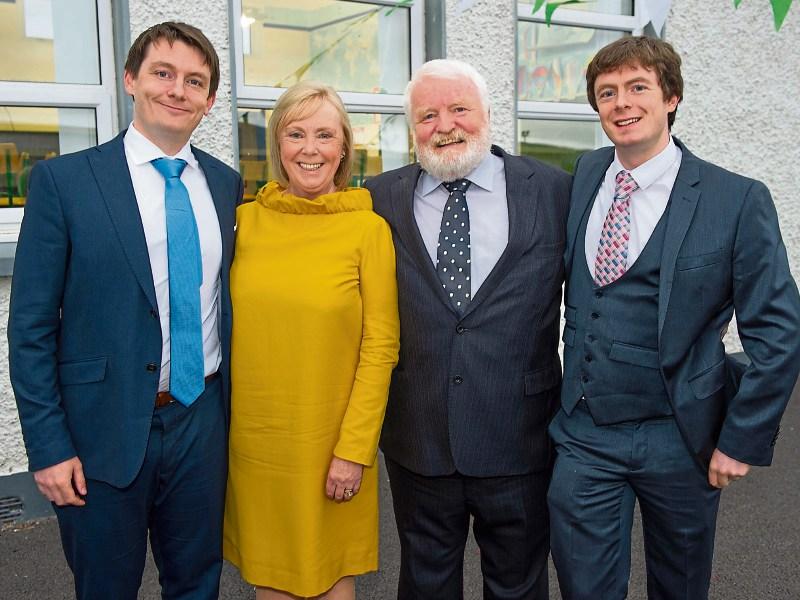 Ann Walsh photographed with her family on the occasion of her retirement as principal at Cloneen National School. From left: Paul Walsh, Ann Walsh, Michael Walsh and David Walsh.

The village of Cloneen was abuzz with chatter, laughter and song on June 16 this year.  A large crowd had gathered in the Church of Our Lady of the Nativity to bid farewell to the popular principal of the local national school, Ann Walsh.

After holding the rein for 10 years and teaching in the school for 18 years, Ann decided her time had come to relax and enjoy her retirement. Her husband, Michael and sons Paul and David were among the many family members present to help in the celebration of her retirement mass.

The mass was celebrated by the Very Rev. Fr. Lambe and the beautiful singing was provided by the Cloneen choir and the children from the school. The music was expertly performed under the guidance of choir mistresses Mary Noonan and Gillian Coulter. Ann Walsh photographed with staff members on the occasion of her retirement as principal at Cloneen National School.

The children of Cloneen N.S. played a large part in the mass, with readings, hymns and reminiscences of stories about Ann in times gone by. Offertory gifts were presented, which included the school bell and memorabilia of all the 37 years of teaching in Ann’s career.

The Deputy Principal, Una Kiernan said some poignant words on her experience teaching with Ann and Ann herself finished the mass with her fond memories of her time in Cloneen N.S. She also paid tribute to SNA’s Aileen White and Trish Fitzgerald on their departure, and thanked them for their contributions to the school over the years.

The congregation then filtered over to the school grounds where a marquee was kindly erected by Milo McGrath and a fantastic spread of cakes, buns, coffee and tea was generously provided by the parents of the school and the Parent’s Association.

The Board of Management made a presentation to Ann along with another presentation from the Parent’s Association. The weather was mild, and the atmosphere was relaxed. A thoroughly enjoyable evening was had by all and it was a deserved tribute to a lady who gave her all for the good of the children of the surrounding area of Cloneen National School.