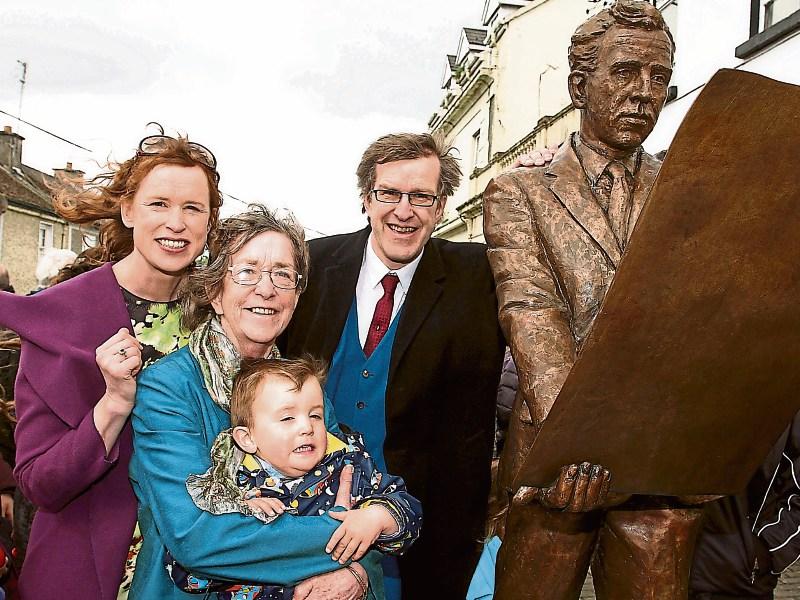 Thomas MacDonagh's granddaughter Muriel McAuley at the unveiling of the statue honouring MacDoangh in 2016 with her daughter Michelle Drysdale, son Paul McAuley and grandson Matthew Drysdale

On a chilly but bright autumn day, Cloughjordan gathered to honour poet, patriot and native Thomas MacDonagh when it opened its Garden of Remembrance this Monday.

The opening was performed by MacDonagh's great-granddaughter Michelle Drysdale in the presence of his granddaughter Muriel McAuley and Cllr Mattie Ryan, Cathaoirleach of Tipperary County Council.

The garden opposite the GAA park named after the executed Easter Rising leader and which bears his name, was first mooted in 2014 by then councillor Jim Casey as part of the local commemorations to mark the centenary of 1916.

Together with a local committee they approached Tipperary County Council and received €40,000 towards the project. Heritage Minister Heather Humphreys gave them a further €80,000 from the Ireland 1916 Office and the local community raised €10,000.

“The garden is a fitting remembrance of Thomas MacDonagh,” said Ms Drysdale, recalling that when his parents arrived in Cloughjordan in 1887, they had been welcomed into the community.

“Cloughjordan continues to welcome new families. You have opened your hearts and your houses to us and have worked hard to keep his memory alive. We feel truly blessed,” she said.

Cllr Ryan recalled the highlight of 2016 in Tipperary was the unveiling of a statue to MacDonagh by Ms McAuley. “Thomas MacDonagh is remembered throughout the county in GAA clubs and roads. He is also recalled as an educator and it is fitting that another local educator, Roche Williams, owned the field where the garden is,” he said.

The Williams family were also praised by Ms Drysdale and county CEO Joe MacGrath, who also praised council administrator Rosemary Joyce for her work in delivering the project.

Mr Casey, who also praised Ms Joyce, said the opening brought a conclusion to the work of the committee, who had given of their time and expertise to ensure MacDonagh's memory would be honoured.