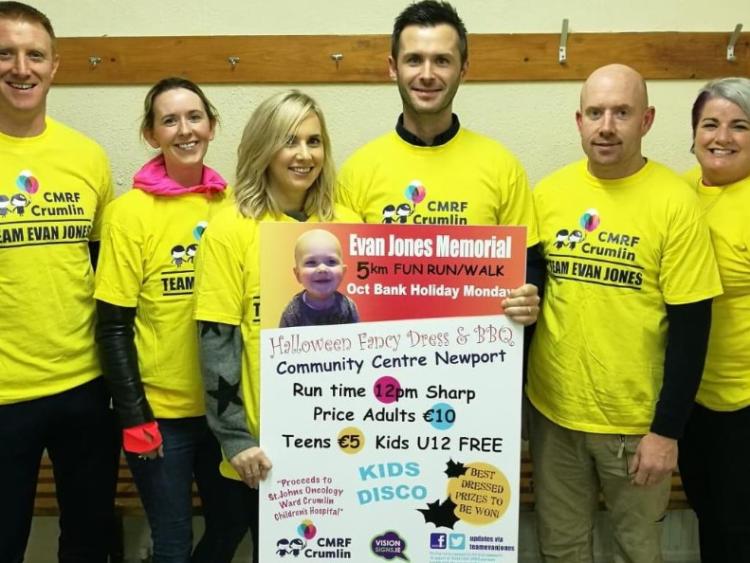 Hundreds of walkers, joggers and sprinters are set to  lace up their running shoes this October Bank Holiday in memory of Newport toddler Evan Jones to raise money for CMRF Crumlin and national ambulance service BUMBLEance.

The Evan Jones Memorial 5km, which is now in it's second year, will honour the brave toddler who passed away in 2017 after a battle with a rare form of childhood cancer. Both charities are particularly close to the Jones family as Evan availed of the Bumbleance services while undergoing treatment in Dublin.

“Evan made such an impact on the locality and that really showed at our first event last year. We had over 1,400 participants and all the money raised went towards cancer research and St. John’s Oncology Ward in Crumlin which was very important to us,” Evan’s dad Paddy Jones tells the Tipperary Star.

The run is open to all age groups and participants are welcome to jog, walk, sprint or stroll their way around the 5km loop before heading back to the village community centre for a delicious BBQ and refreshments and the all important kids disco.

Participants are also encouraged to don their best fancy dress with prizes for the best dressed family, teen, adult and child awarded on the day. There will also be a special category for the best dressed “Bee” costume in honour of the Children's National Ambulance Service' Bumbleance who will have one of their vehicles on hand at the event.

A host of fantastic raffle prizes are also up for grabs on the day including a stay in the five star Fitzwilliam Hotel Dublin with dinner in Glovers Alley Restaurant, 500 litres of home heating oil, a Nespresso Coffee Machine, a €300 voucher for Dromoland Castle, Afternoon Tea in Dromoland,  a €250 voucher for the Trump Hotel in Doonbeg and an overnight stay and evening meal at the Five Star Europe Hotel in Killarney.

The Evan Jones Memorial Fun Run/ Walk will take place from Newport Community Centre on Bank Holiday Monday 29th October. Registration opens at 11am and the run kicks off at 12pm.

Entry is €10 for adults and €5 for teenagers while kids under 12 are free.