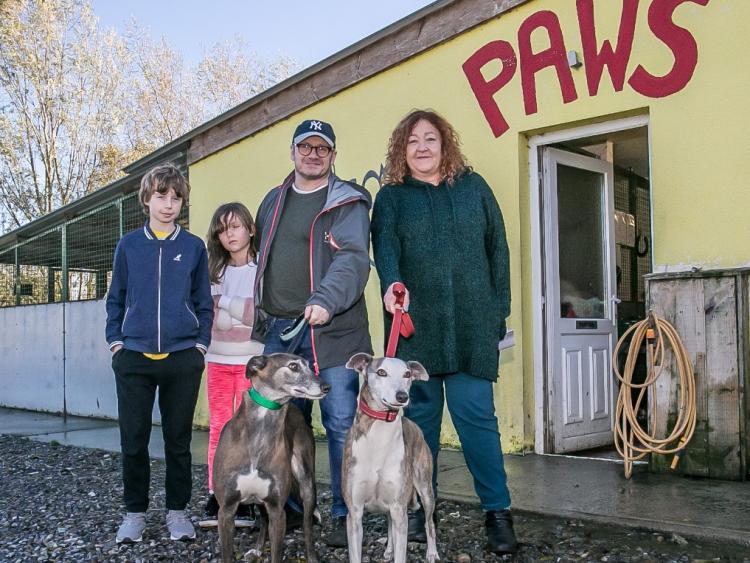 Film director and screenwriter Lenny Abrahamson with his children Max and Nell pictured with Gina Hetherington of Paws as well as Ivy and Dobbie PICTURE: PAT MOORE

Oscar-nominated director Lenny Abrahamson is using his celebrity credentials to help boost the profile of a Tipperary animal shelter which is currently in over €40,000 worth of debt in veterinary bills.

PAWS animal shelter in Mullinahone currently cares for nearly 100 abandoned dogs of which 75 percent are lurcher and sighthound breeds. Last month the charity received a veterinary bill for nearly €42,000 and this is expected to rise significantly again by Christmas.

After hearing about the shelters plight on social media, the talented filmmaker decided to visit the centre on Saturday to help raise awareness of the work of the Tipperary charity which has been in operation since 2006.

“I love animals, I always have and I hope I can make a difference,” said the What Richard Did director, who adopted his own lurcher, named Jake, earlier this year after immediately falling in love with the animal following a visit to the DSPCA.

“There is a crisis of abandoned lurchers in this country at the moment,” he said, adding that any stigma around racing breeds needs to end.

“People think they need a lot of walking, they might be aggressive etc but that’s not the case. These dogs make great family pets, they are very placid and once they get their run or walk in they are very content. They are gorgeous dogs and it's heartbreaking to see so many without homes, subjected to cruelty and abandoned in the country.”

It was inspiring to see the amazing work Paws is doing with so few resources. Beautiful dogs looking for homes and a quick drive from Dublin. Heartbreaking to see so many lurchers which make FANTASTIC pets. https://t.co/PYXd5o55Th

He also urged anyone thinking of giving an animal as a Christmas present to “think long and hard” before making the commitment.

“We need to move away from commercial breeding facilities. Growing up we always took in strays or dogs from shelters and people need to stop buying recklessly,” he said.

“In the last three or four years the number of animal cruelty cases have mushroomed, especially on sighthound breeds. We have never received one lurcher or saluki  that has been able to stand on its four feet,” Gina Hetherington of PAWS Animal Rescue told the Tipperary Star.

"Lenny is a lovely person with a huge heart and we were delighted to welcome someone of his calibre to Mullinahone. We hope the public take note and start to look at adopting these animals as family pets," she added.

Abrahamson also urged the public to support the rescue centre which is largely dependent on charitable donations to cover its annual vet bill which runs into the thousands.

“These smaller centres run by people like Gina need public support and I urge anyone thinking of making a charitable donation to think of places like PAWS.”

Abrahamson achieved critical acclaim after earning a best director nomination at the 2015 Oscars for his film Room based on Irish-Canadian author Emma Donoghue’s novel of the same name.

To help offset costs, PAWS have recently launched a charity calendar and Christmas card pack, available now on their website, as well as registering for Facebook Fundraisers which allow the public to donate to the rescue centre online.

To get in contact with PAWS Animal Rescue call 0529153507 or check them out on Facebook at  @PAWSAnimalRescueIreland. PAWS is located in Mullinahone, Co. Tipperary.