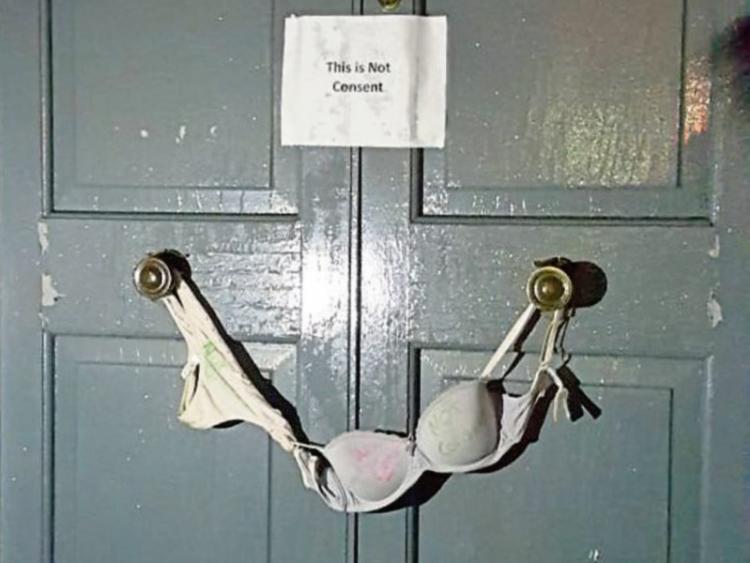 Tipperary Feminist Collective (TFC) placed items of women’s underwear on the doors of Cashel District Court in response to a recent example of victim blaming during proceedings at the Central Criminal Court in Cork.

Protesters placed the items on the doors of the Courthouse in Hogan Square, on Wednesday evening, November 14, following a case where a 27-year-old man was found not guilty of raping a 17 -year-old girl. In the course of her closing arguments, senior counsel for the accused, Elizabeth O’Connell made the following remarks to the jury: “You have to look at the way she was dressed. She was wearing a thong with a lace front."

A spokesperson for TFC said that while they accept the verdict of the court, “we as the general public are not aware of all the facts of the case. We were - and continue to be - absolutely outraged at Ms. O’Connell’s remarks. TFC accepts that every case turns on its facts and that these remarks may not have been the turning point of the case at hand. However, to suggest that consent may be inferred by what kind of underwear a woman is wearing is simply deplorable.”

“According to the law, what you wear, how you act and what your sexual past looks like should have no bearing on whether you have consented to sexual activity.

“We are tired of victim blaming. Of rape culture. And we’re not the only ones. Across the country, men and women protested under the banner #ThisIsNotConsent”.

The spokesperson added: “We stand in solidarity with the women who marched with their underwear of all shapes and sizes, colours and materials. We stand in solidarity with the victims and survivors of sexual assaults - those who face an unsympathetic and aggressive court system and those who were unable to face such an ordeal, for it is those women who are on trial too.

“However, in practice these damaging tactics are still being used by defence lawyers in order to imply that previous sexual acts, interactions or dress style can be used to make assumptions about future behaviour and willingness to consent,” added the spokesperson.

In September 2018, the terms of reference of a review of the investigation and prosecution of sexual offences in Ireland were published.

The expert group is due to present a final report to the Minister of Justice by the end of the year.

The Tipperary Feminist Collective urges this review group to take into account this week’s events and recommend new ways of trying sexual offences that do not re-traumatise survivors of rape and assault.