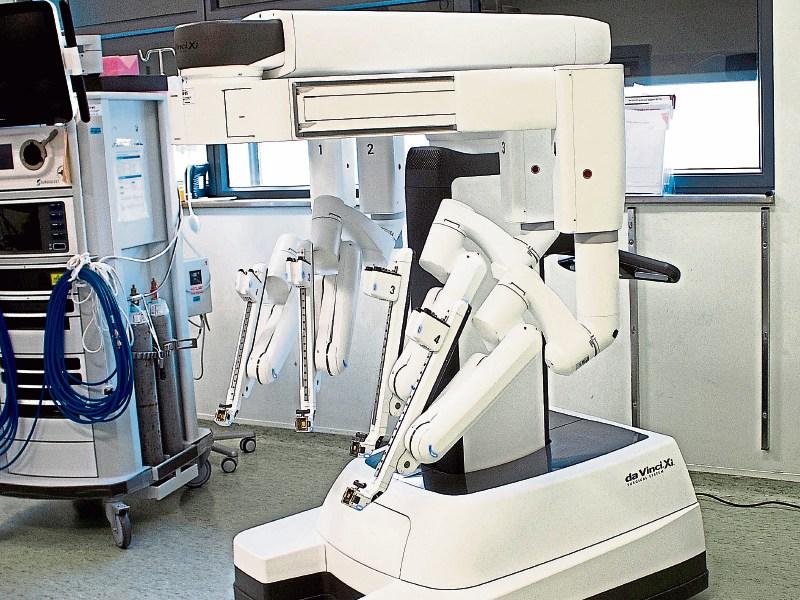 The da Vinci Xi robotic operating machine which, it is claimed, is being underused

A Tipperary GP has raised concerns that a €2.6m surgical robot that could benefit local patients needing prostate treatment is being underused in University Hospital Limerick.

The hospital was given the dual-console da Vinci Xi through a donation from the JP McManus Benevolent Fund.

It is the only such machine in Ireland that can treat radical prostatectomies.

Unfortunately, national policy does not allow it to be used for this purpose, one of the most common operations in urology, according to Nenagh GP Pat Harrold.

“This very expensive, ultra-modern surgical robot is underused and forbidden to be used for radical prostatectomy, the very purpose for which it was designed,” Dr Harrold wrote in a column in the Health+Lifestyle section of the Irish Times, where he writes a regular column.

He said that, instead, patients were being sent to Galway, where they were likely to undergo a robotic operation in a private clinic such as the Galway Clinic.

“However, if the patient develops complications after the operation, such as infection or sepsis, they have to go back to UHL to be admitted and treated. So UHL is deemed competent to look after after patients only when things get complicated,” he said.

Dr Harrold said that the policy began as far back as 2006 when the National Cancer Strategy was launched and it was felt that cancer treatment should be centralised.

But, he said, there had been considerable evolution of the health service structure since those boundaries were drawn.

One such development was the donation of the Da Vinci Xi to UHL, as it provides minimally invasive keyhole surgery, enabling largely improved recovery periods in comparison to regular operations.

He estimated that the robot can provide annual savings of €110,000 in equipment use and that there was also an estimated cost saving of four bed days per patient.

“The out-moded policy which forbids the optimum use of the robot is wasteful of public money as well as equipment,” he said.

The GP also pointed out that UHL was the only Level 4 hospital in the HSE being prevented from carrying out one of the most common urological cancer operations.

“It seems unfair for patients in the Mid West catchment area to have to go to Galway, Dublin or Cork for one of the most common urological cancer operations. The effect of the National Cancer Control Programme has not been to centralise, but to diversify, prostatectomy into private hospitals,” he said.

Dr Harrold said that students and trainee surgeons were being denied vital training in robotic surgery, and warned that they would seek the training they need elsewhere.

This robot would make a post in the hospital very desirable for not only young consultant urologists, but also bright, young registrars, he said.

He said that the 400,000 patients in the Mid West had the best of equipment and expertise but could not avail of them because of a national policy that had failed to move with the times. “They deserve better,” he said

The HSE has not responded to a request for a comment on Dr Harrold's claims.