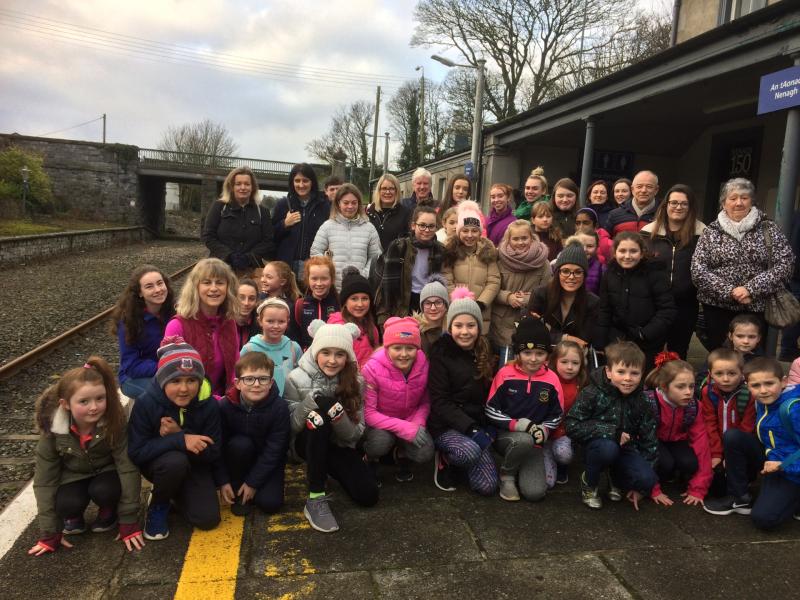 Virginia O'Dowd, North Tipperary Community Rail Partnership, kneeling left, with some of those who went skating this Wednesday

A total of 117 people put their skates on this Wednesday, January 2, for North Tipperary Rail Community Partnership's annual trip to Limerick on Ice.

This is the 15th year that the partnership has organised the highly-popular trip, which Virginia O'Dowd of the partnership, said had grown year after year.

"The trip has become so much part of the Christmas and New Year calendar along the Ballybrophy to Limerick rail line that this year we are running the trip over four days," she said.

It was Nenagh's turn to travel on January 2, with Cloughjordan heading off to Limerick this Thursday; Roscrea going on Friday and the numbers from Cloughjordan are so good, they have organised another visit to Limerick on Saturday, January 5.

"This is a fun day out and as well as bringing communities along the rail line together, it also helps to promote the line. We have seen an increase in passenger numbers using the line every year after the trip," she said.

This year's event almost took a tumble even before it started as Irish Rail suffered a signal failure on the line on January 2 and had to put on bus transfers to Birdhill.

"In fairness, to Irish Rail, they did not let us down," said Ms O'Dowd. "They responded very quickly to the unexpected situation and made sure we got to Limerick on time."

The company made sure there was a full train service for the journey home, she said.

Ms O'Dowd thanked Irish Rail and Limerick on Ice for their assistance in making the day run smoothly, with Limerick on Ice giving a discounted entrance to the facility on production of a train ticket.

Irish Rail operates a €6 return fare from anywhere along the Ballybrophy line, with children travelling for €3 return.

The partnership's trips continue this Thursday and Friday and anyone is welcome to come along and join the fun. Normal train times apply.