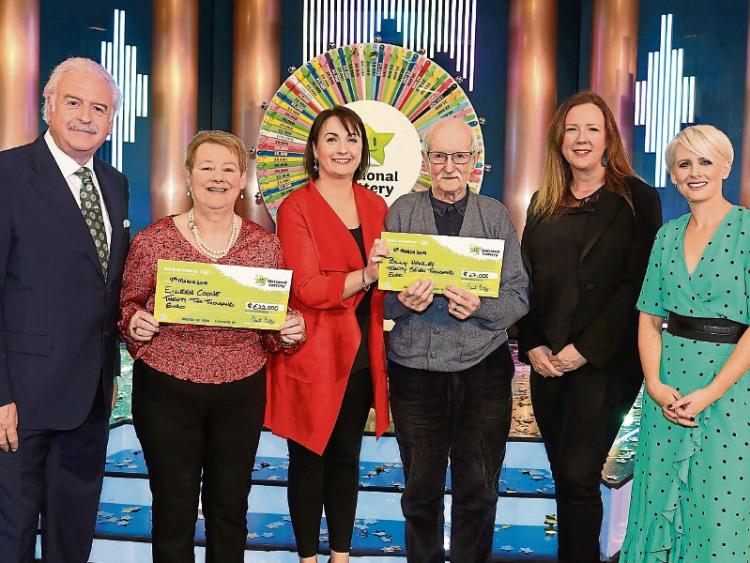 Two Co.Tipperary women won a cool €49,000 between them after appearing on the National Lottery Winning Streak TV game show on RTÉ One last Saturday (9th March).

Eileen Coone from Roscrea and Roz Fitzgerald from Coalbrook, who played on behalf of her dad, won €22,000 and €29,000 respectively on the popular game show co-hosted by Marty Whelan and Sinead Kennedy.

The game show appearance was a long time coming for Eileen who bought her first Winning Streak scratch card almost 30 years ago when her daughter, Margaret, was just a few weeks old. Eileen got three stars and believed her newborn daughter would bring her luck and she would get on the show! It took three decades for Eileen to achieve her Winning Streak ambitions.

Eileen is mother to six children - Margaret, her only daughter, and sons Seamus, John, Ciaran, Brendan and Michael. She also has 16 grandkids.

Roz Fitzgerald from Coalbrook near Thurles was at home last Saturday week when she got text messages to say her dad’s name had been selected to appear on Winning Streak. Roz turned on the television and caught the show credits which confirmed her dad, Billy Hanley’s, was indeed to be a contestant.

The next day Billy, and his wife Theresa, asked Roz to go on the show for him and she was more than delighted to do so for her dad.

Married to Ritchie, Roz is one of two children and has three of her own – Rory, Hayley, and Cara, all who cheered her on Saturday in the Winning Streak studio.

Roz has worked as a special needs assistant with the Brother of Charity Services at the Tigh mac Gamhan centre for more than 20 years.

The National Lottery game show, co-presented by Marty Whelan and Sinead Kennedy, features some perennial favorite games as well but also brand new games including Play or Pay, Roll for Riches, WinFall and Electric Dream – where one player will win an electric car worth €25,000.

A brand new-look Winning Streak scratch card is available in the 5,900 National Lottery retailers all over the country, where as well as the chance to appear on the Winning Streak TV game show if you  get three stars, players will also be in with a chance to win some great cash prizes up to €5,000. The odds for those who purchase a Winning Streak to win is 1 in 1.76 to win a cash or three star prize.  Players can also send their scratch card stubs into the National Lottery where each week, on the show, a player will be drawn as the winner of a Luxury Cruise for two valued at €5,000.