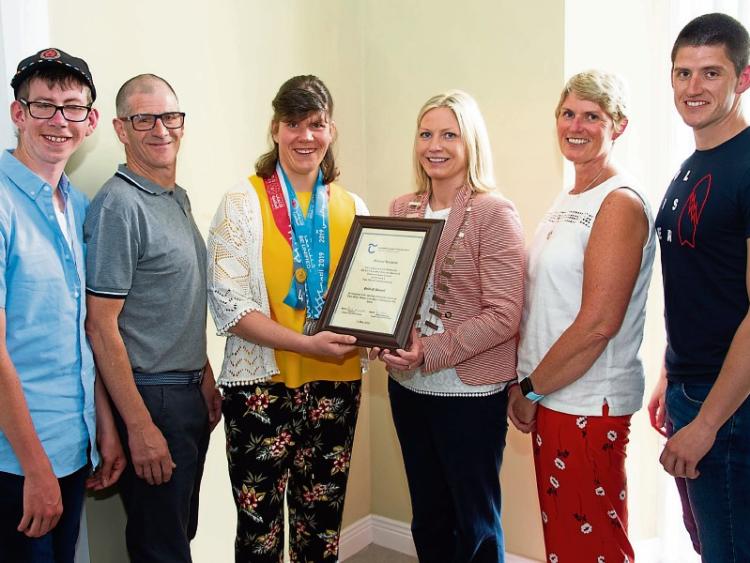 World Special Olympics triple silver  medal winning gymnast Kellie O'Donnell was hailed as an inspiration  and role model for all young people in Ireland at a mayoral reception in her honour at Carrick-on-Suir Town Hall.

The 24 year-old  from Tanners Gate, Carrick-on-Suir was accorded the reception by Carrick-on-Suir Municipal District on Wednesday, May 1 in recognation of her success at the recent World Special Olympics Summer Games in Abu Dhabi where she won three silver medals in the vaulting, uneven bars and on the balance beam. She also finished fourth and fifth in two other events.

Kellie proudly wore her three World Special Olympics medals at the reception that  was attended by about 25 family and friends including her parents Tara and Leslie, siblings Aaron, Jamie and Clodagh.

Carrick-on-Suir  MD chairperson Cllr Louise O'Loughlin, who presented Kellie with a framed scroll marking the according of the mayoral reception, paid tribute to her fantastic achievements at the World Games. She  said  Kellie developed her great passion for gymnastics when she was eight years old and joined  Waterford  Special Olympics Club .

Cllr McLoughlin detailed how Kelly trained at this club two days a week, does a further two days pilates training to help her balance and muscle strength and tops it off with two more days of high intensity fitness classes at  Five Star Fitness Gym in Carrick-on-Suir.

"Conor McGregor doesn't train as much as that," she  declared.

The FG councillor  paid tribute to Kelly's back room team of coaches and the support she received from her parents and siblings. "Your dedication to training  and you determination to achieve excellence in a sport that demands unbelievable balance, strength and flexibility is testament to the type of person you are. You are an inspiration to us all and a role modle to all young people in Carrick-on-Suir, Co. Tipperary and the whole country.”

Cllr Bourke said   her medal winning performances at the World Games was a "phenomenal" personal achievement.

" I have no doubt when you are re-selected to represent Ireland at the Berlin Games in 2023 you will again do us proud," he added.

" I am sure the next time there will be nothing stopping you from winning that bit of gold,” she said.

Kellie's grandparents Kathleen and Eddie Keevan said  it was an absolute honour to be in Abu Dhabi to witness Kellie win her three silver medals on St Patrick's Day and they wished her the best of luck for the future.

Her pilates coach Ciara Conway said from the moment she met Kellie she knew she was going to do so well at the World Games. "When she came into my classes. There was an energy and buzz that wasn't there before. I would like to thank her for doing that. She is fantastic and I can't wait to see where she goes from here.”

Kellie's parents Tara and Leslie thanked the council for honouring Kellie and everyone at the reception for celebrating her success.

"People don't understand when you have a child with special needs or a child with a disability that they don't get the   recognition like  other people do. For me it is great that Kellie is being recognised for all her hard work," said Tara.

She said at the   world games  the athletes were described as people with determination rather than people with special needs or an intellectual disability. "I have to say Kellie has that determination. She worked so, so hard. She never complained. She got up every day and did her training."

Kellie responded to the tributes by telling the reception  the World Special Olympic Games were "an experience of a lifetime" for her. She  thanked  her family, coaches and friends for their support   and  recalled  her journey to qualify for the world games, including the many hours of training.

Her hard work culminated in winning a gold medal at the national Special Olympic Games last year and she recalled the emotional day she learned she had been selected to represent Ireland at the World Games.

View more photos from the civic reception in this week's printed edition of The Nationalist.