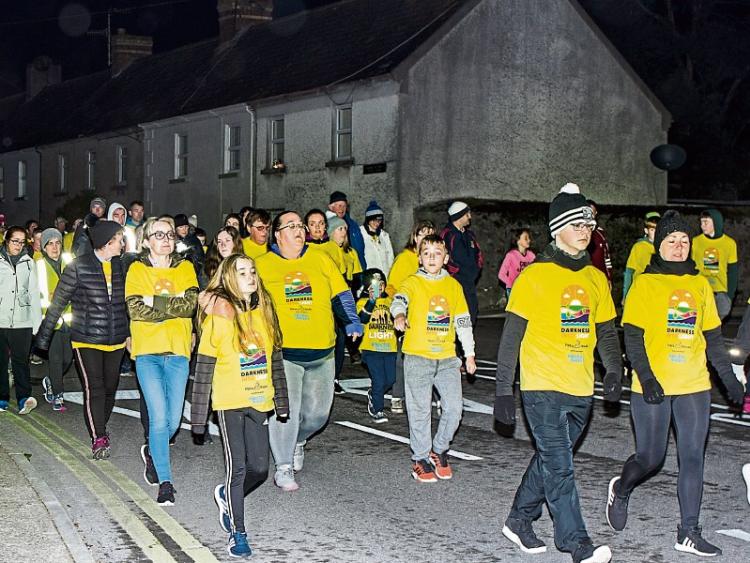 A section of the large crowd that took part in Carrick-on-Suir's Darkness Into Light Walk. Picture Tony Fitzgerald

More than 1000 people put their best foot forward on the streets of Carrick-on-Suir as dawn rose last Saturday morning to take part in the town's fourth annual Darkness Into Light Walk in aid of Pieta House suicide and self harm prevention centre.

The intrepid walkers climbed from their beds in the early hours to be at the start line of the 5km charity walk at Carrick-on-Suir's  Greenschool on time for the 4.15am start.

The event took the sea of walkers dressed in yellow Darkness Into Light t-shirts through the town centre,  across Carrick-on-Suirs Old Bridge and Dillon Bridge. The walk finished back at the Greenschool.

Three firemen  based at Carrick-on-Suir Fire Station ran the 5km in their full fire fighting gear - a feat they also completed last year.

Poignantly among the participants was a group of young friends of a teenage boy, who tragically died by suicide last week. He had attended one of the secondary schools in the town.

Mary Power of Carrick-on-Suir's Darkness Into Light Committee said the organisers were delighted once again with the huge public support for the event.

She said she was struck by the large number of young adults and children who took part in the walk.

Mary said they don't know yet the proceeds of this year's walk but she is confident from the turnout that the amount raised in Carrick-on-Suir over the past four years has surpassed €100,000.

"That is a huge amount of money for a town of only 6,000 people but it's a sign of how things are at the moment and how many people are affected (by self harm and suicide)," she told The Nationalist.

She believes the awareness the Darkness Into Light Walk raises about the services available to help people feeling suicidal is just as important as the money the event raises.

On behalf of Carrick-on_Suir's Darkness Into Light Committee, Mary thanked everyone who took part in the walk, volunteered to help organise the event and all the local business es and community organisations that sponsored or donated  food, equipment and services.