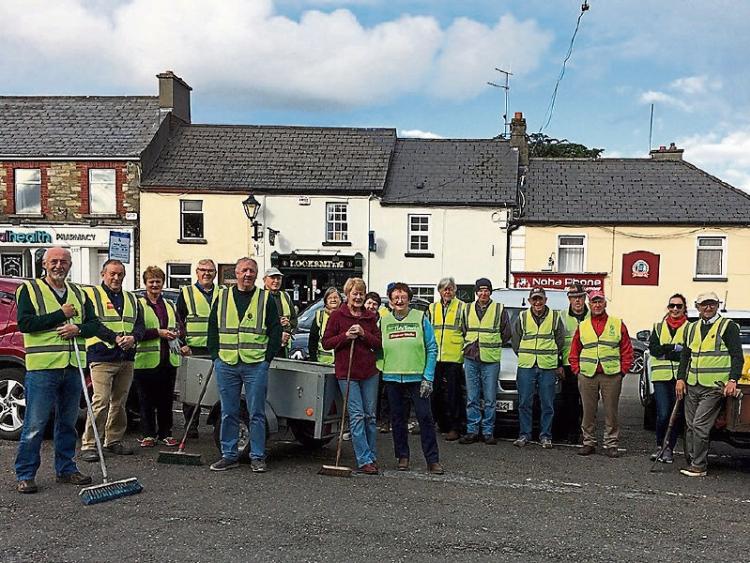 Following the great volunteer effort from Turas Nua on May 17 last, Wednesday June 5 saw a repeat effort, this time with the help of Roscrea Lions Club volunteers.

As has been said previously, ‘ní neart go cur le chéile’ is an old Irish proverb which has many translations, among them ‘many hands make light work’.

This time it was Roscrea Tidy Towns’ ‘big sweep’ that was the beneficiary.

Roscrea Tidy Towns were delighted to have the support of Roscrea Lions Club members for their annual big sweep.

This is an undertaking that Tidy Towns perform on an annual basis prior to the adjudication season for the national Tidy Towns competition.

The biggest problem by far in the sweeping is the proliferation of cigarette butts that are thrown on the paving and streets.

These offensive litter items manage to stick in every crack in the paving and between the rough stones at the edge of streets and are very stubborn to sweep.

The volunteers assembled at the Fancy Fountain in Rosemary Square at 7pm on the night and broke into teams of two, three or four and began sweeping designated areas.

The swept material was then collected. Following completion of the sweep at around 9.30pm, the designated streets were a pleasure to behold.

This community co-operation is much welcomed by Roscrea Tidy Towns who greatly appreciate the support they got from Roscrea Lions Club and Turas Nua.

We thank all those who took part for their generosity. The word ‘meitheal’ aptly describes this type of co-operation. Google offers this explanation of meitheal: “meitheal is the Irish word for a work team, gang, or party and denotes the co-operative labour system in Ireland where groups of neighbours help each other in turn with farming work, such as harvesting crops”.

Meitheal is the Irish expression of the ancient and universal appliance of cooperation to social need.

You know, if more clubs/associations offered even one evening a year to do work like this, Roscrea would be a much nicer place to live.