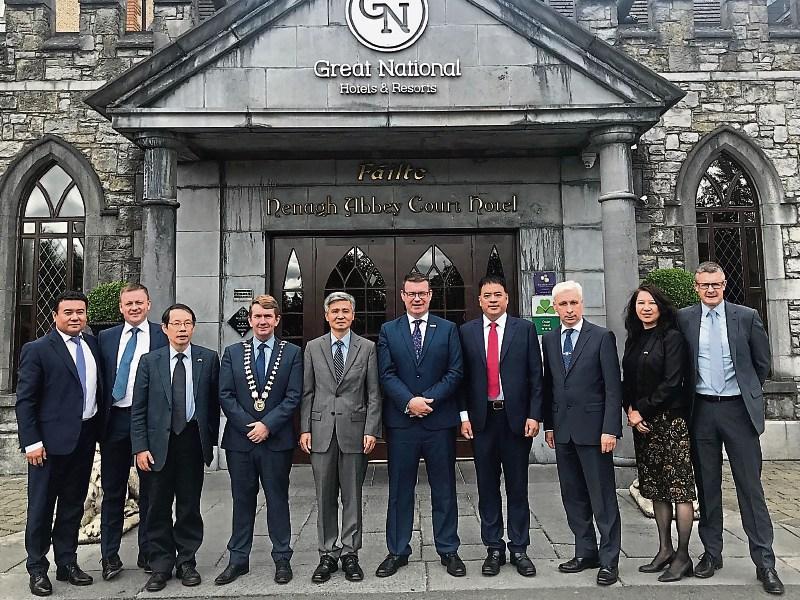 At a breakfast meeting in the Abbey Court Hotel last Friday organised by Deputy Alan Kelly, were the Chinese Ambassador to Ireland, He Xiangdong; Cllr Michael Murphy, cathaoirleach of Tipperary County

Tipperary could benefit from the huge interest by Chinese businesses in the Premier County, it has been stated.

Among the sectors likely to benefit are the county’s milk, beef and pork producers, according to Chinese entrepreneur Xiaoyuan Ma whose company, Sabrina Manufacturing Ltd, officially opened their plastics recycling facility on the old Bord na Mona site in Littleton last Friday.

The company will begin by creating 40 jobs in its silage wrapper recycling operation, and hopes to move on to plastic drink containers and other plastic wrappers within three years, eventually employing around 120 people.

Mr Ma was in Nenagh last Friday with the new Chinese ambassador to Ireland, He Xiangdong, and businessman Yupeng Liu at the invitation of Deputy Alan Kelly.

Mr Ma said that more investment from China in the Premier County could be expected in the coming years, but that no specific sectors had been identified yet.

He pointed out that one of the chief reasons for coming to Tipperary was the excellent co-operation and help they had received from Tipperary County Council and Deputy Alan Kelly.

“We love the people in Tipperary,” said Mr Ma. “They are very friendly.”

He said that the company was “excited” about its project in Littleton, where they were looking to employ people in production, electrical and assembly and repair maintenance.

“ I will continue to work with Chinese business people to bring investment to our county,” he said.

Among the issues discussed by the group in Nenagh last Friday was the potential twinning of Tipperary with a province in China.

Tipperary County Council is to write to the Chinese Embassy in Dublin to progress the arrangement of a twining between Tipperary and China.

“This would be very symbolic given the fact that 2019 marks 40 years of diplomatic relations between Ireland and China,” said Deputy Kelly.

The Labour TD has also been working with Ballina-based company Siga Hydro, Bord na Mona and PowerChina on building the €650m hydro-eletric power plant project at the former Macgobar mine in Silvermines.