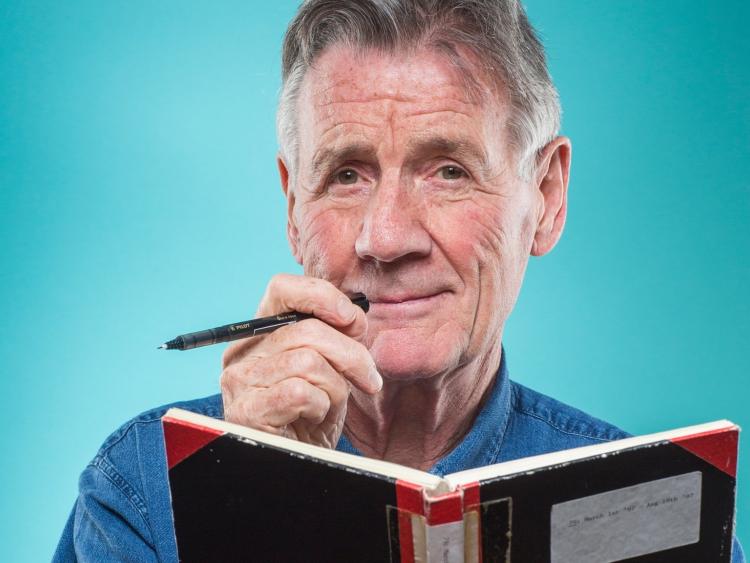 My experience with the publication of my two previous volumes of diaries – The Python Years and Halfway to Hollywood, had prepared me for the task of squeezing 10 manically busy years into a single volume. The process is, I imagine, a bit like the challenge a sculptor faces. To chip away at an amorphous block until a shape is gradually revealed. I saw great chunks of the decade fall to the floor as some 80% of the block was whittled away. Ion Trewin, the much-missed doyen of diary editing, was once again my wise adviser on choice of material. Family holidays were jettisoned in their entirety; there’s something about hot days, beaches and mosquito bites which just doesn’t travel.

Business meetings, unless they involved something like a snake coming in through the window, were early casualties, as were joyful, but repetitive, train journeys. Equally joyful descriptions of meals and drinks had to be pared back in case they gave the impression that I lived in a restaurant and occasionally went home to change my shirt. Little curiosities, long forgotten, are among the greatest pleasures of an edit. The window cleaner who has vertigo and can only clean the ground floor, the Manchester hotel manager who attributed his wife’s non-appearance at a meal with me to “an attack of the vomits”.

The diaries can be cruel. There are long descriptions of the excitement of filming in New York opposite Meg Ryan in You’ve Got Mail, but a phone call from the director, to tell me that despite being absolutely brilliant, my part had been cut, is dealt with in a terse sentence a month or two later. I have to learn from a newspaper that Felicity Dahl hadn’t liked my audio book readings of her husband, Roald Dahl’s work. I couldn’t ignore the recurrent self-doubt that seemed to weigh on me before a big project. People tend to say that I’ve led a lucky life, but the diary reveals an introspective, self-critical side. Whatever came across as easy often had the most difficult birth. Around the World in 80 Days, for instance. Now seen as a ground-breaking documentary, my diary reveals that it almost broke me. As we sail down the Mediterranean I’m assailed by anxiety as to my lack of qualifications for the job.

Happy times must be regulated too. Amazed delight at book sales or viewing figures can read as gloating; meeting royalty as confirmation of status shopping. It’s important to remember that a diary doesn’t concern itself with the big picture, the wider landscape, the overall scheme of things. That’s the job of an autobiography. A diary is a collection of fragments that show that our lives are much less logical, predictable and orderly than we might like to think.

As much as one might sometimes regret it, any edit must preserve this awkward honesty.

Catch the one o’clock train from Paddington. Driven into Hay. Meet Daniel Snowman, who could hardly be anything other than an expert on Polar travel, and Beryl Bainbridge, a little nervous. At half past five she orders a large scotch with water – I follow her example.

Freddie Raphael is waiting to give his six o’clock writers’ class, but Bernice Rubens bounces in, announcing, without seeing him, “they can’t fill up Freddie Raphael’s talk for love nor money”. I shush her just in time, but Beryl, bless her, has not noticed and blurts out, “So no one’s going to Freddie Raphael then?”

More about Travelling to Work
“Breathless with encounters with the famous … He reveals an almost aggressive competitive streak, especially when it comes to how many books he sells … Nevertheless, it is a book you find yourself devouring in great greedy sessions.” Helen Davies, the Sunday Times. What the critics thought.

Buy Travelling to Work
Travelling to Work: Diaries 1988-1998 by Michael Palin is published by Weidenfeld & Nicolson at £12.99 and is available from The Guardian bookshop for £10.39. Free UK p&p over £10, online orders only. Every purchase helps support independent journalism.
Guardian Members can join Michael Palin on 2 November at a Guardian Live event, where he’ll be in conversation with John Crace.