Sydney to Dublin: Two men from Carrick-on-Suir area to cycle through 28 countries and three continents for children's charities 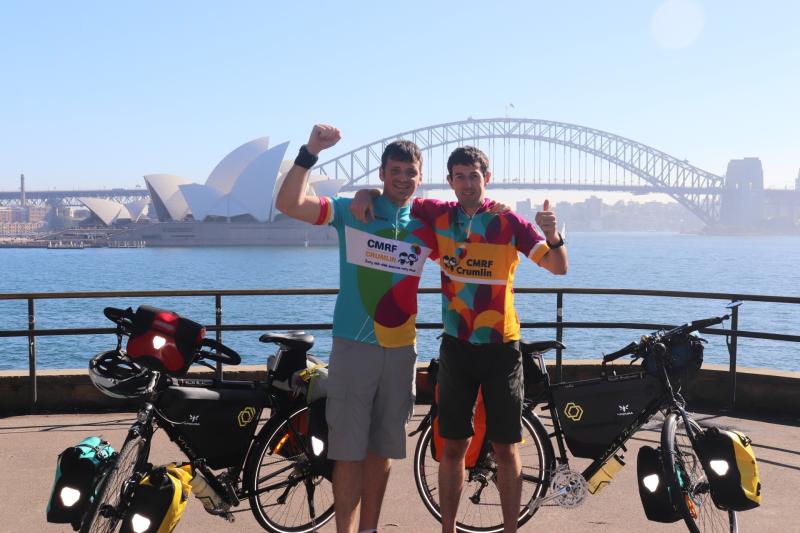 Two young men from the Carrick-on-Suir area will embark in early August on a gruelling expedition to cycle and run an estimated 25,000kms across 28 countries and three continents from Sydney to Dublin.
Thirty years-old Daithi Harrison from Clairin, Carrick-on-Suir, and Paddy Flynn, aged 29, from Knockalavalla, Rathgormack, will begin their journey of a lifetime at the entrance to Sydney Children's Hospital at 10am on Sunday, August 4.
The two friends are cycling across three continents and through 28 countries to raise funds for Sydney Children's Hospital and Our Lady's Children's Hospital, Crumlin, Dublin.
On the way, the keen long distance runners plan to run a 64km ultra marathon in each country they set foot in.
Paddy, who is son of Michael and Mary Flynn, emigrated to Australia in 2010 at the height of the recession and has worked in the construction industry in Sydney since then. His friend Daithi, who is son of Jim Harrison from Fethard and Dympna Power from Treacy Park in Carrick, has also worked in construction in Sydney since arriving in Australia last October.
Both men intend to stay in Ireland when they complete their arduous expedition, which they expect will take up to 15 months to complete Their target is to reach Dublin in October, 2020.
They said their motivation for embarking on this expedition is to learn about the world and about themselves and their capacity to overcome adversity and challenges.
"We have been challenging ourselves physically and mentally for the last few years from long distance running to acting courses and really putting ourselves in situations where it has a very likely outcome of failure," the duo told The Nationalist.
"Each time we have done so, we have learned a lot about ourselves even more so when we failed than succeeded and each time it slightly changes you and how you see challenges. To have the opportunity to do this almost every day for 14 months or so was just too good to pass us by.”
Paddy's experience of watching heart rending scenes of sick children being admitted to Sydney Children's Hospital and the upset of their parents while working on a construction project outside the hospital prompted them to use the expedition as a fundraiser for the two children's hospitals.
"We decided we could really do something to help kids who have such a mountain to climb at such a young age," they said.
The first part of their journey will be to cycle across Australia to Perth on the west coast. They plan to pedal about 100km a day. They expect travelling through the sparsely populated interior of Australia will be one of the most difficult parts of their trip.
"There will be very little to see apart from red dirt most of the way. There is a 1200km section called the Nullabor Plain with nothing except a roadhouse every 200km or so."
They plan to run their Australian ultra-marathon about half way across Australia around the area of Port Augusta.
After a week resting in Perth, they will fly to Vietnam and start cycling again.
They will travel through Cambodia, Laos, northern Thailand and onto Myanmar. There is no border open for travellers between Myanmar and Bangladesh at the moment so they currently plant to travel by boat to India.
Once in India they will cycle north and plan to spend Christmas in Nepal where they aim to visit the Everest base camp and do some mountaineering if they have time.
After Nepal, they will return to India and cycle to Mumbai from where they will fly to Oman. They plan to cycle through Oman and into the United Arab Emirates before crossing the Gulf of Oman by boat into Iran. After Iran, their expedition will take them to Azerbijan, Armenia, Georgia and Turkey.
Greece will be the starting point of the European leg of the expedition.
At the moment, they plan to cross over to southern Italy, cycle up through Italy, Switzerland, France, Germany, Belgium, Luxembourg, Holland and sail over to England. They will then cycle across England and Wales and take the ferry to Dun Laoghaire finishing at the doors of Crumlin hospital. The final leg of their journey will be to cycle home to their families.
In the run up to the expedition, hhey been fitting in training cycling and running training in between long working days of 12 to 14 hours, six days a week. They are confident they are mentally tough enough for the challenges ahead.
Paddy and Daithi confess they are runners first and have only picked up cycling as a means of transporting themselves across half the globe. "We have done a lot of running over the last years and competed in races in Tasmania and New Zealand in the last few months."
Running has been a relatively recent pursuit for both men. Paddy played a lot of GAA growing up while Daithi was a rugby player.
You can follow Paddy and Daithi's expedition and donate to their fundraising campaign by logging onto their website: www.2cycle28.com and clicking the donate button.
Their instagram account is: of_mountains_and _men