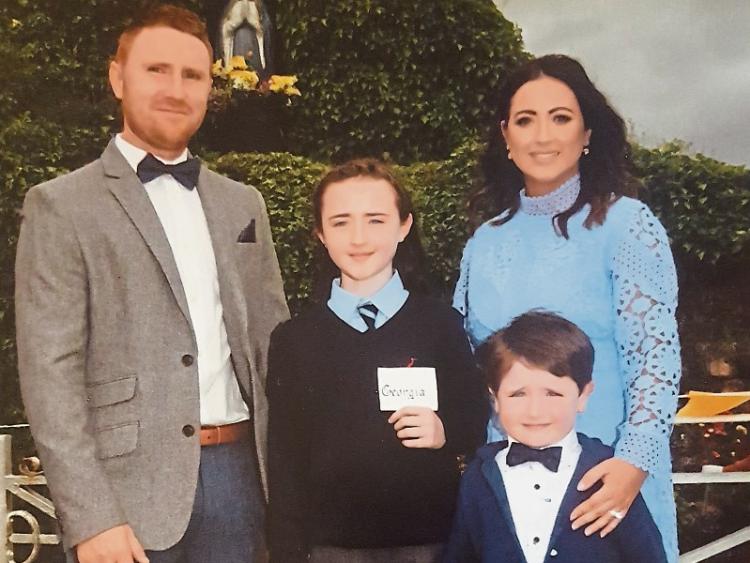 A happy family photo of the Barrys before Michael's sad death

Sinéad and Michael Barry, from outside Dundrum  were like any other family in Ireland – a young married couple in their 30s with three young children (13, 6, & 1) and self-building their own home.

That was until March 2019 when tragedy changed their lives forever, when Michael passed away after a short illness.

Sinéad and their children are now in desperate need of the goodwill, love and support of their community and county to come together and help this family finish the home that Michael was building.

Helping Sinead to achieve her dream is the first DIY SOS in Ireland, a television series that features people coming together to help those in need.

The show is presented by Baz Ashmawy.

This is a nine-day build and the organisers  desperately need tradespeople and suppliers to help  complete the family home.

A spokesperson said - “Its a huge project but in such a desperately sad time in this family's life, we hope the Tipperary community will come together and help make something positive out of it.

“We need people to sign-up with us and volunteer asap - we are holding our trades and suppliers day in Dundrum, Co. Tipperary on  August 22 where those registered who can volunteer their time, or materials/interiors,  meet the team and hear about the project.

The build itself is due to take place from Tuesday, September 17 to Wednesday 25, with the family getting to see all the amazing work the community and county has done.

34-year-old Sinéad Barry from Cappawhite  met local boy Michael Barry when she was 19. It took just one date to the cinema and they were inseparable.

They settled down and started their little family life together and had been renting a house for the last 14 years.

Their daughter Nicole is now 13, their son Rowan came along seven years later, and then little Keeva (1) completed their family last summer.

As their family grew, so did their hopes of a home of their own: they found a lovely site to build their dream home in 2014 and  raise their children outside of the village of Dundrum. Not wanting to burden themselves with a mortgage, they used any savings or extra money at the end of each month to chip away at each job that needed to be done.

Michael was the breadwinner and worked locally as steel erector, but as a talented woodturner and craftsman he undertook much of the work in the house himself, sacrificing his evenings and weekend.

As a family, all their time, hopes and dreams were pumped into the house.... And when they felt that pinch of sacrifice, they would remind each other how “once they are in the house they would start living properly”.

Finally they reached a decision to apply for a small loan to complete the house, as they were rapidly outgrowing their rented cottage.

But in the end, they never got to apply for that loan....

After complaining of vision problems in his eye over Christmas 2018, Michael was admitted to hospital in January this year. He was diagnosed with a brain tumour and further tests diagnosed it as Stage 4 Metastatic Melanoma.

Subsequent scans revealed the disease had spread to his back, liver and lungs.

In a matter of weeks Michael’s health deteriorated rapidly. He slipped into a coma on March 23 and passed away surrounded by Sinead and family. He was 34-years-old.

It’s more than half built, almost ready to be lived in, but right now the plan is on hold.

Michael was the sole income earner in the house and with no life insurance, Sinead has no way to fund finishing the construction, fit-out and landscaping of the site. It was Sinead’s sister-in-law Catriona (Michael’s sister) who reached out to DIY SOS asking them   to help them at the very lowest point in their lives, and finally get them moved into the family home that Michael and Sinead worked so hard for over many years.

“We need to get Sinead and the children into the home Michael was building for them. And we need the help of trades and suppliers in the community, in  Tipperary, and right around Munster and Ireland to come together to make this happen.