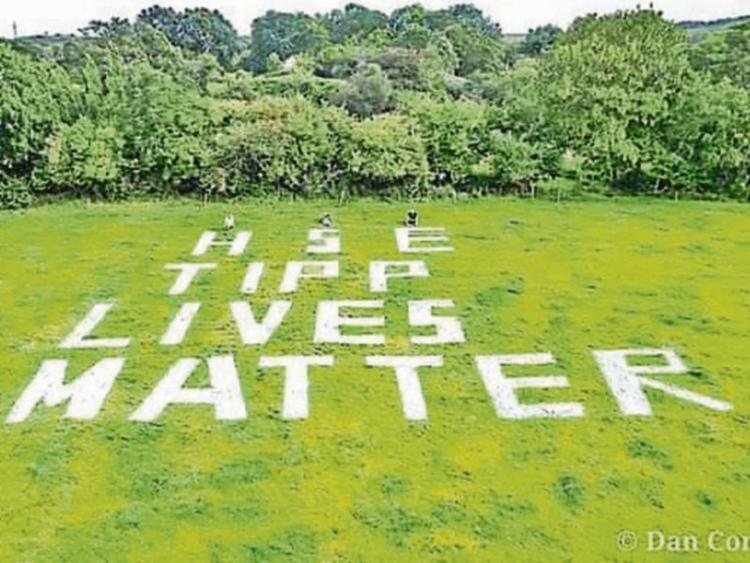 The message HSE TIPP LIVES MATTER has appeared in huge lettering in a field on the Comeragh foothills above Clonmel. It was organised by the Tipperary Fight for Mental Health Services group

The campaign for the restoration of mental health services in Tipperary has been taken to the foothills of the Comeraghs overlooking Clonmel, with the message HSE - Tipp Lives Matter spelled out in white letters in a field on the mountain.

“The message is 80 feet long and 50 feet wide and is facing directly towards the hospital”, says Dan Connolly of the Tipperary’s Fight for Mental Health Services group.

“We put it there to raise awareness and let people know what’s happening in Tipperary”.

The campaign will be stepped up towards the end of next month when a public rally and march will be held in Clonmel on Saturday afternoon September 28.

Last year more than 1,000 people took to the streets of the town demanding the full restoration of mental health services in the county.

“We’re hoping for an even bigger turnout this time”, says Dan Connolly.

“People are actually dying because of the current situation. There are 161,000 people in Tipperary and yet there’s not a single bed for those suffering with mental health difficulties”, he stated.

Mr. Connolly has hit out at politicians, including Jim Daly, Minister of State for Mental Health and Older People, for what he described as their broken promises.

“We met with Minister Daly a year and-a-half ago, when he told us that a Crisis House would be provided in Clonmel.

“But now the plans for that facility have to be changed and we believe the money isn’t available to do that.

“We keep being told a new Crisis House will be opened in Clonmel. But that already exists and it’s just a new building that’s being provided.

“It still does nothing for the problem we have in Tipperary, and new beds won’t be provided.

“You have to be in the system to get one of those beds in the Crisis House. If you have a breakdown and you’re brought to the South Tipp General Hospital you’re transferred to St. Luke’s Hospital in Kilkenny.

“Why don’t they spend the money and reopen St. Michael’s unit in Clonmel, which closed seven years ago, asked Mr. Connolly.

“When St. Michael’s closed in 2012 we were told we would have a Rolls Royce community service but that hasn’t happened”.

Mr. Connolly said the group had met a stone wall with every request made.