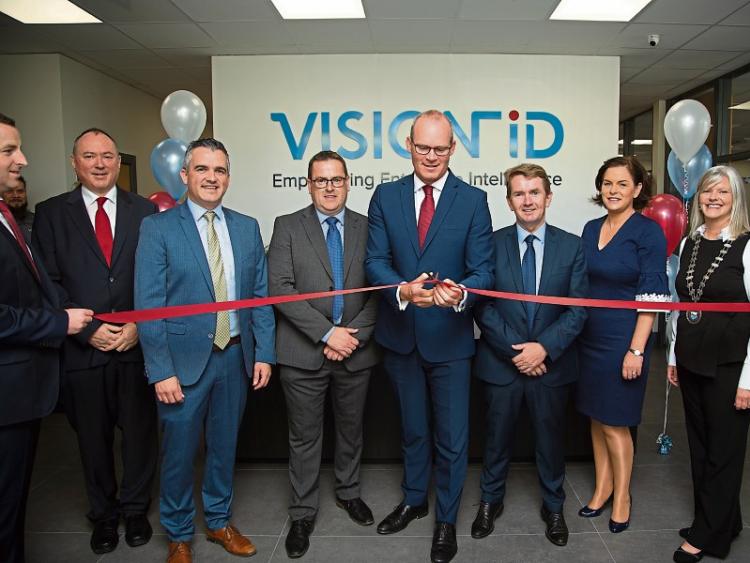 Clonmel technology company VisionID plans to double its workforce to 60 over the next three years, Tánaiste Simon Coveney was informed when he officially opened the firm’s new larger premises this week.

The Minister for Foreign Affairs & Trade lauded the indigenous company's new headquarters at Ard Gaoithe Business Park off Clonmel’s Cashel Road as a "signal of intent for the future".

VisionID was founded in 2000 and was based at a smaller business unit at Gurtnafleur Business Park in Clonmel up to January.

Ten extra staff have been recruited since the move to the new premises, which is four times larger. This brings the firm's current workforce to 40.

Mr Arthur outlined that one section of VisionID's workforce provides multi-lingual technical customer service product support to its international clients. The staff are skilled in  Spanish, German, Italian and French. Other staff are employed in technical support, sales, customer service administration and finance.

He said VisionID was now one of the largest indigenous companies in Clonmel and when recruiting new staff they focus on ambitious graduates, who have finished any travelling they wish to do and want to base their career in the Clonmel area. Most of the firm's staff are living in the Clonmel area.

Tánaiste Simon Coveney was taken on a tour of VisionID during his visit to the company on Monday. He met and spoke with staff members before cutting the red tape on the new premises. MD Robert Jones also showcased to him some of the company's high tech products.

One was a mobile workstation used by medical staff in hospitals and by workers in the pharmaceutical industry, where it's also important to have a clean paperless environment. Another was a high tech RFID device that can be used for tracing cargo on ships.

The Tánaiste was also shown a managed mobility service used by a global car hire company.

Mr Coveney told staff VisionID was a great success story and congratulated its founders and team on growing the company over the past 20 years.

"This company has proved that you don't need to be in a city to attract  the kind of workforce that a growing multi-national is working with,” he said noting that VisionID is now a multi-national.

He said it was really important the Government supports the message that firms don't need to move to an IT cluster in Cork, Limerick or Dublin.

"We are looking to create a counter balance to Dublin, which has been too dominant." This over dominance has resulted in the quality of life in Dublin not being as good as Clonmel and other places.

The Tánaiste also spoke at the official opening about the challenges Brexit presents to Irish businesses and the supports the Government has put in place to assist them in preparing for the impact it will have on Irish trade.

He warned the situation will get more difficult before it gets better but promised that the Government will try to get the best deal for businesses like VisionID.

Mr Shanahan praised VisionID MD Robert Jones for building up the company in Clonmel and noted the firm now does business across countries, continents and languages.

He wished all at VisionID the best of luck as the company expands and takes on the world.

“County Tipperary Chamber are very happy to see the innovation that Vision ID, Ireland's leading barcode and RFID solutions provider, has brought to Clonmel over the past 20 years,” he added.