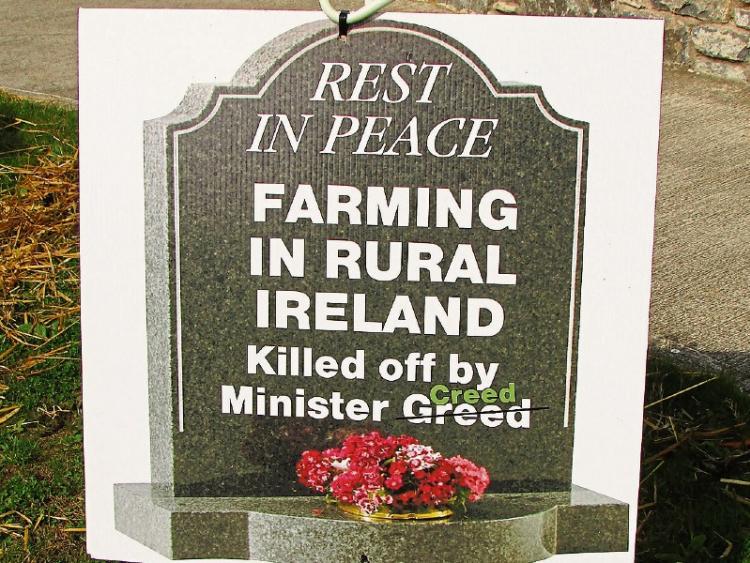 A protest placard outside ABP Cahir

Farmers continued to protest outside Cahir's ABP meat processing plant over low beef prices crippling their livelihoods (yesterday) Tuesday as renewed efforts to resume negotiations with meat industry representatives and the government were being progressed.

On Monday night, representatives of farmers protesting at nine meat processing plants around the country formed the new Independent Farmers of Ireland Group and elected three national representatives, who have made known they are  willing to enter talks with Minister for Agriculture Michael Creed.

The picket at the gate of ABP Cahir is now in its second week and the eight farmers standing vigil there at lunchtime yesterday vowed the peaceful protest will continue there even when talks resume.

Placards dotted around the cattle trailer where the protesters were gathered spelled out the protesters message to visitors to the ABP plant and passers by. “Peaceful Farmer Protest Please Respect Our Picket. We Are Fighting For You Not Against You.”

It’s understood meat processing at ABP Cahir has slowed over the past week because of the protest but not ceased.

When The Nationalist visited the protest last Wednesday morning, August 28, three large round bales blocked the entrance gateway. They were rolled out of the way by protesters to allow employees and any vehicles not transporting cattle free access to the plant.

Trucks and trailers transporting cattle were stopped and requested by protesters not to pass the picket. Those who insisted on being allowed through were not prevented from entering the factory.

Yesterday, the round bales had been moved away from the gateway and there was no physical obstruction to entering the factory grounds.  One farmer The Nationalist spoke to said because of the High Court injunction the meat processing companies had taken out, the protesters were no longer approaching people arriving at the gate with cattle to ask them not to pass the picket.  They could only speak over to them across the road.

The farmer, who didn't wish to be named because he is one of people listed on the injunction, said most farmers were turning around with their cattle when they turn up at the plant but the cattle dealers continue to pass through the gates with their loads.

He appealed to all farmers, from tillage to dairy, and rural people to come and support the protest. A rota is currently operating to man the picket 24 hours a day.  "We are fighting for you, not against you," he said echoing the message on one of the placards.

Retired beef farmer Bob Wilkinson from the Glen of Aherlow was  among the protesters. "I got out (of farming)  because I couldn't make money. I am retired four years and I gave over 40 years farming,” he said.  He feels  smaller farmers are being pushed out but points out  they are the ones looking after the environment. Anyone making millions wasn't worried about nature, he said.  He believes beef prices have never been great but farmers had more money out of beef years ago because the overheads weren't as big.

Clonmel dairy farmer John Sheehan was supporting beef farmers at the picket  because poor beef prices have a knock on effect on other farming sectors.  He sells all his calves to beef farmers but if they aren't able to make a living, his calf sales are affected.

"We are all farmers; we are depending on each other for income," he said.

He claimed that for every €10 worth of beef stocked in a supermarket, just €2 goes to the farmer and the rest goes to the meat processor and retailer. "The factory only has to keep the animal for three weeks and the shop only keeps it for three days but the farmer has to keep it for two years minimum."

Mr Sheehan said Minister Creed could at a "stroke of a pen" ease the situation for beef farmers by getting rid of a series of restrictions on the sale, movement and residency of cattle. Farmers, for example, suffer a reduction in price if they sell cattle over the 24 and 30 month age limits and bulls over the 16 month limit. He said removing or relaxing these Department of Agriculture restrictions would give farmers more flexibility.